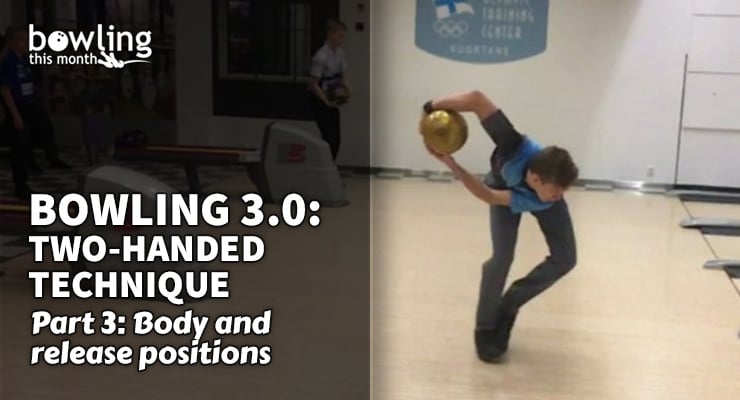 In following with the same format of our one-handed discussion from the Bowling 2.0 series, the final two elements of the two-handed game that we need to cover are the body position and release. In addition to these topics, I’ll present some of the most common mistakes and problems that two-handers run into, as a summary to this series.

It’s safe to say that there’s a lot more happening through the release for two-handers than for one-handers. More body movement during the approach is required for an effective delivery, and the release itself is more dynamic as well. It’s much more difficult to isolate the body position discussion from the release itself because of how dynamic and explosive everything is at the end of the approach, but let’s go through each one and discuss some key points to remember.

To review, the goal of a one-handed bowler is to essentially set their spine tilt position in the third step and then maintain that position as much as possible through the release. With two-handers, we get much more movement. Again, though, we can see that the game has changed over the years since Jason Belmonte and Osku Palermaa first came onto the scene.

Belmonte and Palermaa had more forward lean than one-handers, but they are fairly upright compared to the modern wave of two-handers. They walk with a spine angle of about 45 to 60 degrees until the swing reaches its apex. At this point, the body would drop with the swing, getting close to 90 degrees of forward tilt for the actual release position.

The next generation of two-handers use much more flexion, and much earlier in their approach. Today’s wave of two-handers get to 55 to 75 degrees of forward body tilt during the start of the approach, gradually leaning more and more forward with each step, until achieving approximately 90 degrees in the third step, well ahead of the swing reaching its apex. From here, the spine angle remains steady until the release. Probably the most extreme example of this is Jesper Svensson, who achieves flexion of up to 110 degrees during his approach.

The hips are generally more open to allow for this and to create the space needed for the swing, which we discussed in the last article. This position allows the swing to get much higher, which is part of the reason we’re seeing higher and higher swings out of two-handers compared to the ...