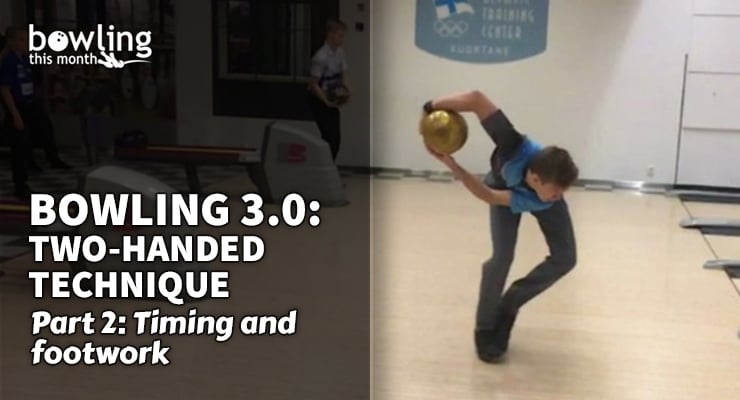 In our first article covering the physical game of the two-handed style, we got as far as the start position and swing. Continuing on with our analysis, this article will cover two-handed timing and footwork. As we’ll see, the timing of the two-handed game is markedly different from the one-handed game, and even the footwork has some significant differences.

It’s worth reminding everyone, coaches and bowlers alike, that it doesn’t do much good to compare the two styles. For this reason, we’ll refer to optimal timing for two-handers with little to no reference to what one-handed timing looks like, which was covered here. As for footwork, we’ll use the same channel method that we used when discussing one-handed footwork, but this is simply because it is a handy visual reference regardless of which style a bowler uses.

As I said in the introductory article, many two-handers will use a six-step approach, while others still use five steps. For the purpose of discussing timing in this article, we’ll use a five-step reference system because, for many bowlers, that is what they’re used to when talking about the one-handed game.

As we’ll see when discussing footwork, the addition of a sixth step doesn’t affect timing, but it has a specific purpose that helps two-handers more than one-handers, which is why it is more common with this style.

The first timing point of the two-handed game is to check the placement of the feet when the ball has reached the bottom of the swing. When the ball is below the shoulder, the heel of the third step should be touching the ground.

It’s important to note that we are looking for a vertical line from the shoulder to the ball, not for the arm itself to be vertical. At this point, the arm might still be slightly bent, and the hand position is such that the arm will be completely behind the ball as we see in the ...