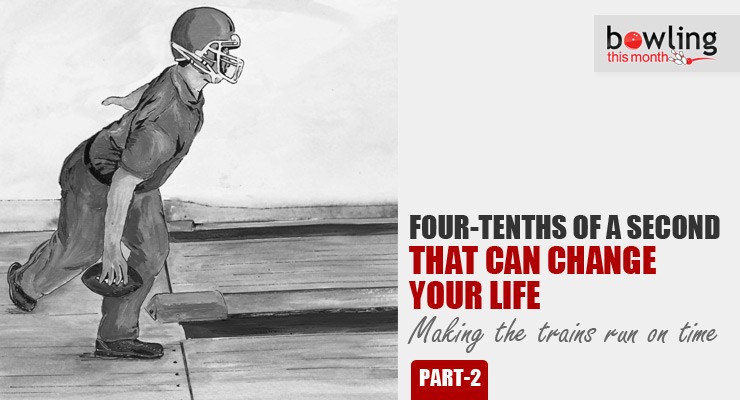 I call this “football” timing because visually it works like this. When I see a bowler’s slide foot come to a stop at the foul line I say the word “foot” and when I see the ball go by the ankle, I say the word “ball”. When the bowler is timed properly it sounds like I said the word “football”. It takes around four-tenths of a second to say the word football, so you can put your stopwatch away; you don’t need it.

A timing standard in the past has been that the foot and ball should arrive at the foul line at the same time. I hopefully shared enough information in Part 1 to prove to most bowlers that “same time” timing is a weaker routine for delivering a bowling ball, so I won’t go over it again here. If you are not convinced, please go back and read Part 1 in the October issue.

In Part 1 I was even so bold as to say that “football” timing could change your life. Judging from the phone calls and emails I got after bowlers had a chance to give it a try, “life changing” was not an overstatement.

Sometimes very small changes in our games can make incredible advances in our scoring ability, especially if the player is already proficient at the sport. I was at a PBA regional recently and actually made some timing changes on the fly with Josh Chambliss of Charleston, SC.

Josh is one of our American heroes in the United States Air Force; that’s his day job. Josh is a different kind of warrior ...