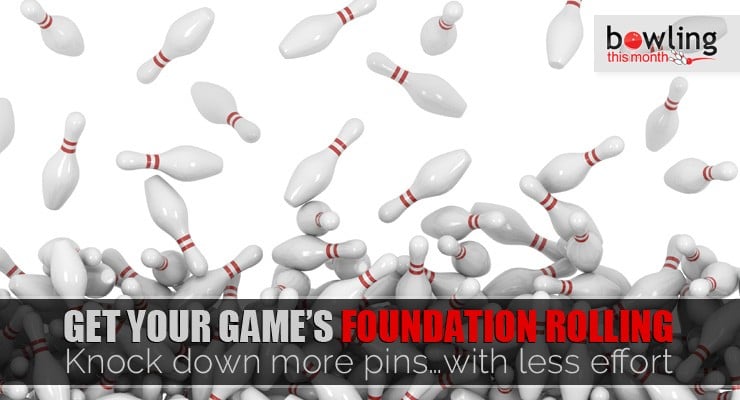 The primary fundamental component of proper bowling execution is the armswing. It is crucial for attaining rhythm, accuracy, and balance.

Armswings can be categorized in three ways: free, semi-controlled, and fully controlled. Each swing has been practiced and implemented with success. However, in my estimation, based on more than 50 years of study and observation of the greatest bowlers in the history of the game, odds favor those who possess free and unimpeded armswings. Consequently, I am an avowed advocate of the free armswing.

My conclusions are based on techniques that have been tested and proven on the PBA tour. They are universal in nature and adopted and implemented into an individual’s own style. They don’t necessarily require radical changes in a bowler’s game.

Surprisingly, a great majority of foreign bowlers have absorbed the true basic fundamentals of free armswings; particularly bowlers from Japan. A close observation of Japanese bowlers will feature smooth, fluid armswings and approaches. I cite the Japanese players because they have shown that they take the game seriously, reading and studying the game, and conducting clinics throughout their country, long before others outside the United States.

Those of us who have been fortunate to see Junichi Yajima, the Earl Anthony of Japanese bowling, can truly appreciate Yajima’s fluid, effortless game which has netted him close to 50 titles over his outstanding career. Yajima, now a senior bowler, can still compete with the best in Japan, principally due to his impeccable method of execution.

Far too many youthful American bowlers are more enamored with wide-hooking balls than they are with accuracy and balance. Many amateurs jumping to the “big show” encounter difficulties during their baptism of fire. While other major sports often produce rookies who can make an immediate impact in their professional careers, it is a rarity in professional bowling.

Among the recent few who have succeeded is Rhino Page, a rare talent who honed his skill in collegiate competition and later displayed his wares on the Team USA squad. He created a tremendous splash in his rookie year on the PBA tour. Nonetheless, Page, like former rookies Marshall Holman, Mike Aulby, Chris Barnes, and a few others who preceded him in years gone by, is a rarity in professional bowling.

An ideal armswing can be broken down into four movements: ball position, pushaway, backswing, and forward swing.

The ball should be positioned in a comfort zone, preferably around waist high. There is no set pattern, but lowering or raising the ball can be a determining factor in controlling speed. I recommend positioning the ball about waist high.

It should be nested in a comfortable area, with the weight supported by the non-bowling hand. This eliminates any undue strain, pressure, or tension in the forearm. The grip should be firm. The arm, from the wrist to the shoulder point, should be free of any restriction. This is a delicate balance that can be mastered only with continued practice. Here’s a key to developing a free swing: imagine detaching the arm from the shoulder. Drill a hole in the arm, place a set of well-greased ball bearings around the hole, insert a rod through the arm, and re-attach it to the shoulder. The ball should swing back-and-forth on ball bearings via the ball weight and… voila, you have a free armswing.

The pushaway is the key to a free armswing. It is the launching pad for a proper delivery; the trigger for creating a pendulum swing. The key to developing a free swing is permitting the weight of the ball to control the arm throughout the entire swing by virtue of gravitational force…. into the backswing and down through the forward swing until it reaches the flat plane of the swing. At this juncture, the hand and wrist should be in a release point slightly behind the sliding foot…positioned to accelerate through the shot.

With the weight of the ball nested in the non-bowling hand, begin the pushaway in a curling or arcing manner. The pushaway should be soft and gentle, preferably extended BEYOND the first step (in a four-step delivery) As the ball reaches the peak of the pushaway, disengage all muscles in the bowling arm, transfer the ball weight to the shoulder joint, and permit the ball to descend on its own weight.

One of the most advantageous aspects of an ideal pushaway can be related to the law of physics (or gravity). For example, if you are using a 15 pound ball and push it up to a certain point and permit it to fall via gravity, it will ALWAYS swing into the backswing at the same height. It will not gain height nor reduce in height in its path from the pushaway through the backswing and into the forward swing. This is the LAW OF PHYSICS. This is the secret for consistency!

The height of the backswing is determined by momentum created by the weight of the ball. The arm acts like a pendulum. The ball is propelled by weight. The weight, swinging back and forth, never changes. As stated previously, if the swing is controlled through gravity, it will reach a certain peak, time after time. Conversely, the path of the ball becomes higher or lower ONLY if the pushaway varies.

The ideal backswing should be about shoulder high, providing the shoulders remain erect. Tilting will increase the height of the backswing and, in all likelihood, create an early swing. An early swing will likely place the release point beyond the strongest leverage area and, in many cases, result in releasing the ball on the upswing, a no-no with modern, high-powered bowling balls.

Lower backswings are recommended but this manner of execution is not etched in stone. Many top bowlers possess high backswings and have carved out nice careers. For example, Patrick Allen, Chris Barnes, Mike Fagan, Dave Husted, Mika Koivuniemi, and Pete Weber have proven that high backswings are not essentially detrimental to proper execution. However, these stars are exceptions to the rule and ALL perform in coordinated and well-balanced manners.

Nonetheless, the one damaging effect of this type of backswing can result in an EARLY swing that places the ball beyond the strongest release point. This occurs when the bowler attempts to force the forward swing instead of permitting the swing to continue through gravity.
It was the one chink in Dave Husted’s armor and a major flaw in Chris Barnes’ game. There is one big difference in Husted’s and Barnes’ early timing. Husted ALWAYS pushed the ball upward in his pushaway, which helped delay the armswing. However, Barnes usually subscribes to the hinge pushaway; that is, pushing the ball in a downward manner…a practice that can result in an early swing… one that is released slightly beyond the strongest leverage area, which, in turn, weakens the shot. In my humble opinion, this is the cause of Barnes’ poor television record. Early swings usually occur in critical situations.

Conversely, short backswings are not recommended. However, several PBA stars have done very well with this type execution. For example, who would argue that Marshall Holman wasn’t one of the greatest players ever on the PBA tour? Holman had one of the shortest backswings in the game but compensated for it with one of the fastest approaches. In fact, Holman’s slide began at least four feet before the foul line. He released the ball while still sliding. This was in contrast to power players who planted prior to the release. Yet, Holman possessed one of the most potent strike balls in PBA history.

Ryan Shafer also delivers with a short backswing but Shafer is one of the few players who has done very well ripping through the delivery with extreme force… again, proving that there are exceptions to the rule.

In my opinion, Norm Duke and Danny Wiseman possess the ideal method of ball placement (pushaway). Not so incidentally, both are prize students of Coach Bill Hall. Both stars place the weight of the ball in their non-bowling hand and direct the ball in line with their intended target. Duke and Wiseman are seldom affected by early swings.

The backswing becomes critical at the start of the forward swing for bowlers with unusually wide hips. Such bowlers normally wrap the ball behind their hips, necessitating a realignment of the arm into the forward swing. This tendency can be modified by positioning the ball parallel to the outside body line. This permits the ball to clear the hips in a straight backswing. Another proven method would be pushing the ball to the left (for righthanders) and dropping it in an outside-inside path (a half-figure-eight movement) then inward into a straight line.
A correct backswing can be likened to a successful golfer’s swing: muscle free, arms extended, taken back in a gentle, smooth fashion. Good golfers NEVER pull their golf clubs into the backswing.

The forward swing is the culmination of an ideal armswing. It requires undying patience and must be executed without a trace of anxiety, particularly in its beginning. The forward swing should not be forced. The top of the backswing must act as a dropoff point. Imagine the arm and ball as a crane and wrecking ball employed by demolition crews. The ball should fall in a downward slope from its own weight and descend powered ONLY by its own momentum.

Forcing the ball through the downswing can prove catastrophic. It will create an imbalance at the release because the exertion impedes rhythm. It can also induce an early turn of the hand at the release point and hinder and inhibit a clean, smooth follow through. More often than not, this results in pulling a shot.

A free armswing affords hand acceleration as the forward swing reaches a flat plane. At this point of the delivery, the hand, and ONLY the hand, should accelerate out, through the ball, and onto the lane. This release, coupled with a proper pushaway and a fluid and free armswing, can result in near-perfect shot execution.

A free armswing equips you to execute at the highest level.

An ideal follow through should be soft and extended with minimum elbow bend. It must be swung from the shoulder, not the forearm, and extended toward the pins, NOT the ceiling. It is advisable to send the fingers to the breakpoint. I do not recommend following through behind the ear with bent elbow.  This type follow through tends to make the ball over-react. Keep the follow through long and extended.

With patience and practice, you will become a better bowler!

Image credit: Falling bowling pins illustration (©iStock.com/RawJumbo2010) is licensed for use by BTM and is the copyrighted property of its original creator.