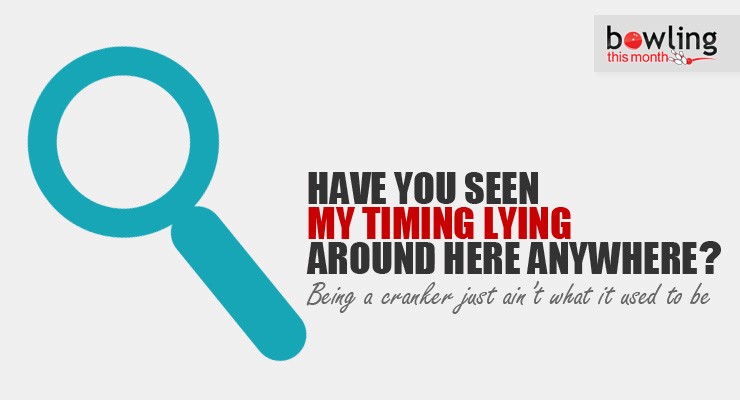 I’d like to talk a little bit about the universal plague: timing. We certainly hear about it constantly. It was off or you didn’t have any tonight (not possible), you had it yesterday but now it’s gone, it was early, it was late, it was wrong, etc. I think timing gets more credit than it deserves and a lot more blame than it earns.

There is textbook timing and then there is how everyone else gets to the line. As soon as the textbook starts to bowl, we can be concerned with how it looks. Meanwhile, in the real bowling world…

We hear a lot about timing being late or early. This implies there is a ‘perfect’, which there is not. Bowling has such interesting language. We talk about hitting the nose, hitting it right in the face, and going through the heart. Three different locales but all the same place on a bowling pin. We talk about left hand spares to the point that a novice righthander wonders how they are going to make those left hand spares when they are not left handed.

The terms fast lanes or slow lanes mean one thing in one part of the country and something else in another part. We ask what weights a person has in a ball as if these weights were installed. I used to think exactly that. I would overhear some dude in league asking some other dude, “What weights do you have in there?” The answer might be about top weight and side weight and finger weight. That meant when the guy in the pro shop took the ball to the back room, he got down vials of top weight and side weight and finger weight and put them in the ball. Seemed simple to me. What else could “weights in there” mean? When it comes to timing, it’s just as confusing.

I’m sure every sport has its nuances that ‘in-the-know’ people understand perfectly. We certainly do. In fact, you ...

Keeping It Simple: The Armswing

Out, down, back, slide