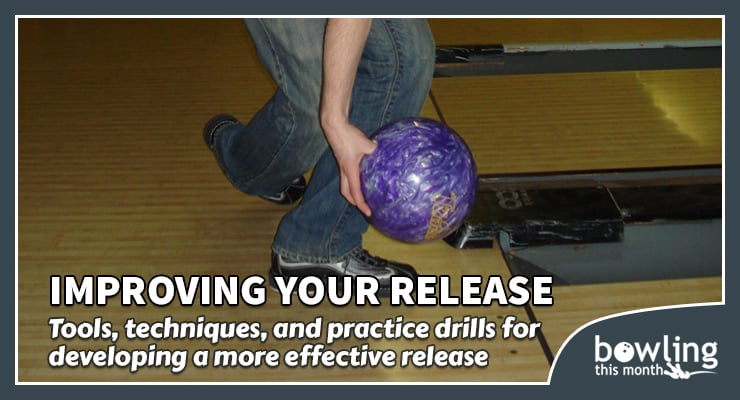 The bowling release. The challenge in mastering it—and in writing about it—is the fact that it takes just a fraction of a second to perform. From a general point of view, this maneuver is more about coordination than about power. Unfortunately, most bowlers think this is where all the power comes from, which ends up taking away from the effectiveness of their release.

In the article that started this series, one of the seven major issues I identified was hitting up on the ball—or, “grabbing it”—at the release. On house shots, bowlers can get away with this kind of release because the pattern does the work of blending out the ball’s motion. On tougher shots, this kind of release can cause a lot of headaches because of over/under reaction caused by too much responsiveness to friction.

But wait, isn’t an effective release supposed to be responsive to friction to create hook? Yes, it is. However, on tougher conditions when there is less margin for error, creating hook is less important than managing when and how your ball hooks.

(Editor’s note: This article is Part 6 of Tyrel’s Seven Common Problems That Can Hurt Your Bowling Scores series. To read the other articles in this series, please click the following links: Part 1, Part 2, Part 3, Part 4, and Part 5.)

A new way to look at it

In order to explain the difference between managing hook and creating hook, I want to backtrack to the start of the approach. Before you start moving, the ball is static. There is no energy in it. If you drop the ball it will land on the floor and stay there. Every element of the bowling approach generates potential energy that can be transferred to the ball at release in order to knock down the pins 60 feet away. The type of release you have will dictate exactly how much of that energy goes into the ball, and in what way.

Let’s look at the example of someone who hooks their ball for strikes, but throws it straight at spares. Many people have a higher ball speed when shooting their spares straight. This isn’t necessarily because they are trying to throw it harder, but simply that their straight release transfers more energy into ball speed than into either rev rate or axis rotation. This happens because:

In this scenario, the bowler’s approach is generating the exact same amount of potential energy, but the release controls where that energy goes. Graphically, it could look like this: 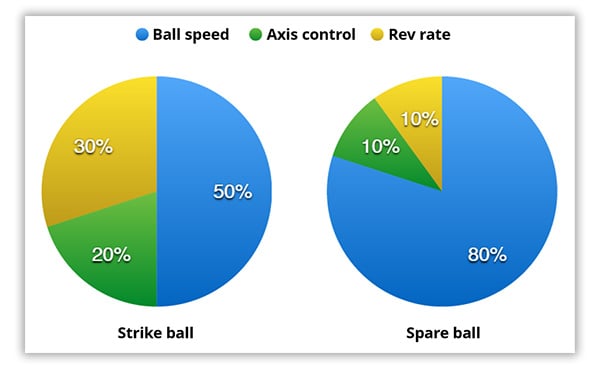 Release “energy distribution” comparison of a strike shot vs. a spare shot.

Alternatively, advanced bowlers who manipulate their ball motion by adjusting their axis rotation angle often don’t change their rev rate, so the extra time it takes to create the extra rotation causes a loss of ball speed. It’s why we so often see professional bowlers “get around it” and ...