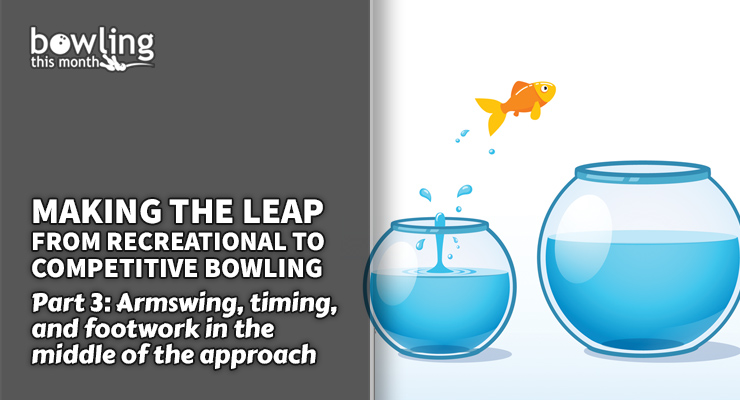 My second article in this series covered everything leading up to and including that all-important first step. Now, let’s examine the middle two steps of a four-step approach. More specifically, we’ll look at several elements within these steps, such as the armswing, timing, and footwork.

A lot is happening between the first and second steps, and especially between steps two and three. The good news is that it is easy to practice these steps at home, which is something I recommend and will talk about a bit more later in this article.

To start with, let’s discuss the different styles of bowlers, because your style has a great influence on the type of competitive bowler you are and the type of game you develop.

In general terms, there are three bowling styles: strokers, power strokers, and crankers. These definitions are really general, so don’t be surprised to hear other bowlers disagree with me or use other terms.

Strokers are those with fairly low rev rates and ball speed; they hook the ball, but their game depends more on accuracy than on how many boards they cross. Power strokers are sometimes referred to as “tweeners.” They have medium revs, medium ball speed, and can throw the ball straighter or with a bit more hook, as the situation demands. Crankers tend to have a very high rev rate, very high ball speed, and they hook the ball from one side of the lane to the other and then back to the pocket.

Not just one type of armswing

In his book Bowling Execution, the late coaching legend and BTM contributor John Jowdy identified three types of armswings. Controlled and semi-controlled are those that depend in some way on carrying (muscling) the ball, while free means that the ball swings freely from the shoulder, dependent on gravity and momentum for movement.

Today’s younger one-handed players have come up with a fourth armswing, a hybrid that I call late-controlled. With this one, the bowler uses a free armswing until just prior to release, at which point the elbow and wrist are quickly bent, and then just as quickly straightened as the ...

Image credit: Leaping goldfish illustration (©iStock.com/IconicBestiary) is licensed for use by BTM and is the copyrighted property of its original creator.