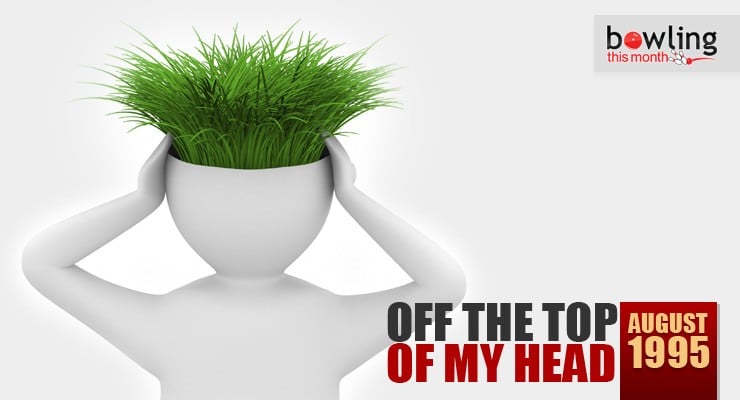 Before going on, I want to apologize for the lateness of this issue, but sometimes when you try to improve service, step one is to reduce it. This is the case this time as we move toward magazine-rate postage which will give you better service starting with the October (and hopefully the September) issue. By at least October, we will have completed all of our conversion to roll back delivery to the first part of the month. Later in this issue, I will tell you more about what was accomplished during our first year, and what you can expect during year two – some of which will take place beginning in September. Thanks for bearing with us. I appreciate your patience.

Now to my monthly sermonette.  As many of you know, I am an advocate of individual and group “hands-on” instruction. Bowling This Month will continue to endorse – without reservation – the USA Bowling coaches certification program, and we encourage anyone who is in the sub-190 average range to seek out a certified Bronze Level coach for basics or a Silver Level coach for more advanced (190s) assistance.

That is not to say that there are no USA Bowling coaches who are qualified beyond their certification. Susie Minshew, a Silver Level coach and LPBT regional champion from Fort Worth, Texas, coached Team Panama in the recent FIQ World Championships, and she is well qualified to instruct more advanced bowlers than her certification might suggest. Michelle Mullen, a Bronze Level coach in the Chicago area, is a Team USA coach and a national LPBT champion with background in all areas of bowling. There are others in the USA Bowling program who are qualified beyond their certification level but they have to wait for the Gold Medal program to be developed so that the program can acknowledge their more advanced skills.

Later in this issue, you will read more about the Bad Boy, Marshall Holman, and Friends (Dave Husted and David Ozio) and their Advanced Bowling Clinic. We also wholeheartedly endorse this effort by Marshall, Dave, and David. They are three of the most qualified, knowledgeable, and competent instructors that the pro tour has produced.

Of course, there are also schools, camps, and programs like Dick Ritger’s, Don Johnson’s, and Fred Borden’s. These too deserve your consideration. And, some of the best instructors in the country have no credentials of any kind except that they have a laundry list of former students who have gone on to greatness. The name that comes most readily to mind in my area is Bill Harris, a man who has single-handedly populated the various women’s halls of fame in Texas and a man who worked with the great Gary Dickinson early in his career.

Bowling has always remained a mystery to me. I don’t mean the sport itself or how to bowl well. I mean the attitude that bowlers have toward the sport and toward formalized instructions is incomprehensible.

I lettered in eight sports in high school and went on to play three of them in some professional capacity. The one thing that remained constant throughout my “careers” is that no matter how much I advanced or how good I got, I always had and needed first rate coaches. Strangely, the better I got, the more coaches I had. Take baseball. At first, I had “a” coach, but eventually, I had a hitting coach, fielding coach, pitching coach, base running coach, and even a motivational coach. You see. The better you get, the more complex the game becomes.

In the beginning, I also had “a” bowling coach. His name was Eddie Brickell, a truly great lefty, who was able to get me to the point where I was ready to learn how to bowl. That was what 200 used to be, the bottom rung of the better bowler’s ladder. From there, I got Bill Lillard, eight-time ABC champion and ABC hall of famer, to work with me on timing and release, Lowell Jackson, the inventor of the dots and arrows, taught me how to read lanes, and Jack Biondolillo worked on improving my approach. By that time, I was running a pro shop, so I was also going to school on equipment. I was raised in sports so for me, the road to success began with coaching and coaching continued for as long as I participated in that sport.

Bowling has never given the respect to coaches that they deserve. For some unknown and inexplicable reason, bowlers have always approached bowling as a do-it-yourselfer, and no sport can be learned on-the-job without outside assistance. People think nothing of going to a college to learn a profession or to a technical school to learn a trade. They go to a golf pro to straighten out their swing, or a tennis pro to work on their serve. Why then is it that bowlers have such an aversion to instruction? Is it because there is so little money, by comparison to other sports, to be made in bowling so they don’t think it’s worth it? If so, think this through. Excelling in a sport is not measured in money. It is measured by accomplishment. Sure money helps, but the bottom line is that the ultimate goal of any athletic endeavor is to reach the level of your potential, to push the curve from what you hoped was possible to what actually was. In most cases today, bowlers will never know how much they could have achieved because so few of them treat bowling as a sport.

Bowling is deceptive because literally anyone can do it, but only a rare few can truly excel. At the highest levels, bowling is too complex to be mastered through self-study. Read everything you can to be sure, but if you are serious about improving, get a qualified coach. You won’t regret your decision.