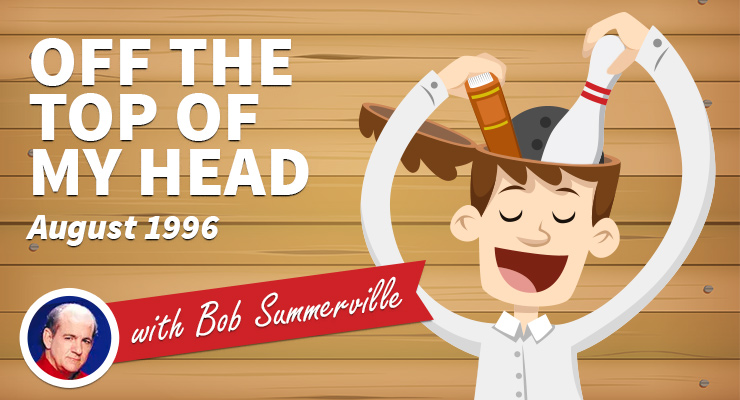 Every four years, when the summer Olympics rolls around, I swear that this time I won’t watch this spectacle that has done so much to cheapen sport in the name of the almighty dollar. Of course, from the moment that Mohammed Ali stood there shaking from Parkinson’s Disease, making his painful contribution to the Atlanta Olympics, I was hooked again. From the swimming venue to team sports to track and field, they had me—just like they have for every Olympics since 1960.

This year, it took only ten seconds to remind me what the Olympics—and what all sport—is really about. As Kerri Strug ran on her sprained ankle for her second attempt at the vault that would determine the final standings for her team and then landed that vault practically on one foot to give the U. S. Women’s Gymnastics team their first gold medal ever, I realized once more why I love the Olympics and why I love sports.

It doesn’t matter that on-site vendors and locally based opportunists around the Olympic Village are thieves. It doesn’t even matter that some of the judging is subjective and biased or that some of the athletes try to use drugs to cheat. What matters is the heart, the dedication, and the determination of the young men and women who take part in the Olympic Games. This year, that one vault became for me a symbol of excellence in sport—not to mention what it said about the character of that young woman. We often talk about sacrificing yourself for the team, but I have never seen that concept demonstrated as heroically or as poignantly as on that final attempt by Kerri Strug. I am just thankful for the Atlanta Olympics so that I, along with the rest of the world, could witness what I believe was one of the most courageous and selfless acts in the history of sport.

Of course, this brings me to bowling in the Olympics. I know that the U. S. Olympic bowling effort is not near and dear to the hearts of all bowlers. I believe that it should be a priority for any bowler who cares about the future of our sport because this is the one thing that would guarantee its survival and growth—not to mention the opportunities it could provide for some of our young athletes. Imagine the impact on the children of America, those kids who do not have the size to throw a shot, the speed to become world-class sprinters, the endurance to run distance, or the money to break into the high-priced world of “amateur” gymnastics.

Think of those young bowlers who now only dream of stepping onto the medal stand to hear our national anthem played in honor of their achievement finally having a real opportunity to represent their country in an Olympic sport. That would be possible because bowling is the one sport that is open to everyone, regardless of size, strength, speed, agility, or social status. Bowling needs to be in the Olympics.

One of the requirements for bowling to receive medal status is that participating countries must have a three-tiered coaching program. This is well underway in the U.S. and in Canada. Still, we need you if this is to be a success.

As I have said before, a great coaching program requires great coaches. Currently, there are about 1,000 USA Bowling certified coaches nationwide. We need more. The goal set by USA Bowling is to have between 5,000 and 7,000 certified coaches by the year 2000. If we are to meet that goal, more of you have to become certified by USA Bowling. It is not enough to say that we support the USA Bowling concept. We have to demonstrate our support and commitment. Even if, or especially if, you are certified through another program like Dick Ritger’s or if you have years of uncertified coaching experience, please consider the USA Bowling coaching program also. You already serve bowling through your knowledge and training, and because of that, each of you would be a welcome and valuable addition to our Olympic effort.

BTM also supports Team USA. Fred Borden has built a highly respected program during his tenure as head coach, and, based on my knowledge of Palmer Fallgren, his credentials, and his reputation, I expect him to expand the visibility of Team USA and lead our national team to prominence. Of course, a lot of what Palmer and his coaching staff will be able to do will depend on money since that always determines what is doable and what isn’t.

Team USA needs to be a true national team that bowls together throughout the year, putting on exhibitions to raise their visibility and increase awareness of bowling’s efforts to gain entrance into the Olympic Games. As Jeri Edwards suggested, we should pay the players on our national team so that they can take leaves of absence from their jobs to represent the United States and USA Bowling.

We need a strong unified effort to get bowling into the Olympics. We need a strong USA Bowling Coaching program. We also need a visible Team USA. I hope that all of you will take part in our Olympic effort. Try out for Team USA. Become a coach. Do whatever you can to support USA Bowling. Even though we have hard working representatives in Greendale acting for us, in the end, the future of bowling in this country and in the Olympics rests largely with us—the bowlers. We have to become involved.