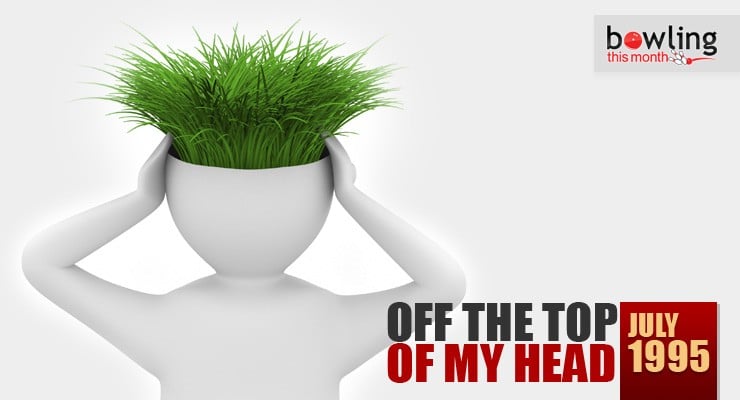 Recently, I did something I never do. I watched sports on TV. I found myself captivated by the NBA playoffs. Then I spent a few hours watching golf – the U.S. Open. As Yogi Berra would say, I saw a lot just by watching.

I realized that whether it’s the fast-paced action of pro basketball or the sleepily paced inaction of golf, sports are boring to watch. I’m sorry armchair quarterbacks, but it’s true. Spectating sports on TV is just dull.

That, by the way, wasn’t what I saw. I saw that all of the excitement that is big-time sports today is the excitement generated away from the game itself. It’s the personalities, the crowd, the hype, and the hoopla. If you think I’m wrong, turn on your TV and mute the sound so you can’t hear anything. No announcers, no interviews with the players, and definitely no crowd noise. BORING!

Bowling is every-sport with the sound turned off. Bowling stars and star hopefuls are publicly the least exciting, least glamorous, and least controversial of any of the sports “heroes” around today. That is not by accident. It has been systematically developed since around 1970 when we first saw that mainstay of PBA operations, the Image Committee.

If you talk to anyone connected with the pro tours now, their main focus revolves around attracting the 18 to 30-year-old age group. This is the group that Madison Avenue considers the most susceptible to TV advertising and the group most inclined to buy impulsively. Still, even though the tours claim that their goal is to lure this age group into the TV bowling fold, both the PBA and the LPBT have an almost unnatural reverence for their middle-aged, prim and proper image. Their mistake is that their image has no appeal to the 18-30 set. If we want a younger audience – which translates into a larger TV share which attracts the big bucks advertisers which means larger prize funds and more new bowlers – we need to forget this nonsense about “image.” We need to do what other sports have done and realize that even though on the lanes, bowling is a professional sport, off the lanes, bowling has to be entertainment.

In the 1950s and 1960s and maybe even as late as ten years ago, bowling could consider itself part of a larger sports market. Today, there is no “sports” market. We compete with other sports to be sure, but for those younger age groups, we also compete with rock concerts, theme parks, movie theaters, and numerous recreations. During TV time, we compete with a host of shows/networks geared primarily to that group. If we want that younger audience both at the tournament sites and as televiewers, we have to give them a reason to want to watch professional bowling. We don’t, so they don’t.

The area formats have been successful in bringing in larger and younger audiences to the tournament itself, but the arena format does nothing to boost the audience in TV land. Arena finals may be an “event” in the arena, but the TV viewers get none of that feel. Except for the reduced number of lanes and the camera pans to a packed house, there is nothing to make us in “Sticksville” realize that anything is different. For us, it is really just bowling as usual.

For years, television has realized that sex and violence sells. Some sports are lucky. Hockey, for example, has enough violence for any crowd lusting to see a lion devour a Christian. Young adults love it. Men cheer the wars. Women cheer the warriors. Even most of the tamer sports have rallied around those flagpoles.

Tennis, for example, caught a lucky break when bad boys McInroe and Connors were verbally abusing umpires on three continents, and lately Gabriela Sabatini has been sold on the covers of almost every glamour and people-oriented magazine. Every sport, except bowling, has marketed itself through its players. Figure skating had Peggy Fleming and Dorothy Hamill. Gymnastics had Nadia. Golf had the toothpaste pushing blonde, Laura Baugh. Skiing had Susie Chapstick. We’ve just seen Shaq plastered everywhere. Now, the Agassi-Sampras ad campaign appears constantly day and night.

Bowling has market potential. There are the would-be bad boys like Dave Farraro and Amleto Monicelli, coverboys like Brian Voss, and covergirls like the Dorins and the lady who graces this cover, Jeanne Naccarato. We need to get them into Sports illustrated, People, GQ, Mirabella, Cosmo, or any other magazine where we have no fans but could cultivate some. That would begin to give the sport some personalities and even some star appeal that we don’t have now.

Then, if we could just add some showmanship to the show. Give us some entertainment. Make the TV show an event for us in TV land.

Also, if you really want a younger audience, Saturday afternoon may not be that great of a time slot. Most people in that age group have a life. They aren’t home on Saturday – day or night. I vote for Sunday night at 9 p.m. Eastern Time. Let bowling go head-to-head with all of those made-for-TV nightmares that all of the channels show.

Are these the answers? Who knows? I do know that it couldn’t hurt. If we don’t do something, the PBA’s and the LPBT’s plain but wholesome images will be duking it out for a 3 a.m. time slot on a channel that satellites can’t find. As I found out after writing this, the ladies are already there in Colorado.