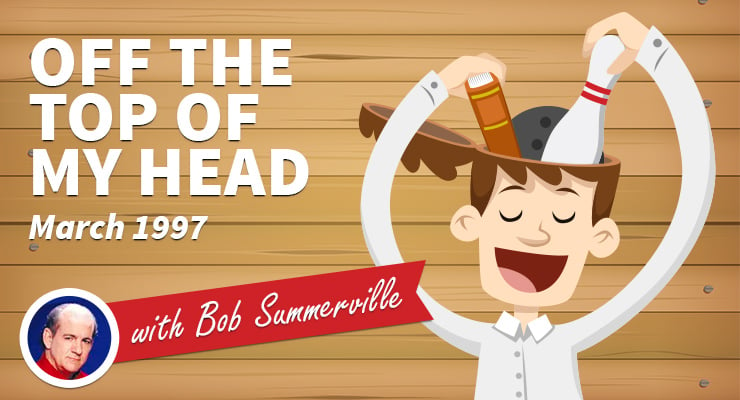 The following editorial was written by Bowling This Month’s founder, Bob Summerville. It was originally published in our March 1997 edition and then subsequently reprinted in our May 2001 memorial issue shortly after Mr. Summerville’s untimely passing.

In this piece, Bob shared why he originally created Bowling This Month back in 1994 and what his hopes were for what it would become. Even though a lot has changed since 1994, Bob’s original vision for Bowling This Month is still our vision today. We hope you enjoy this look back and we thank you for your support in allowing us to continue serving the competitive side of the sport of bowling.

We get so many new readers from month to month that I often forget that most readers do not even know why there is a Bowling This Month. With a lull in the action, maybe this is a good time to talk about it.

As you can tell from my high school graduation photo which accompanies this piece, I am an early-onset old geezer. I don’t even feel comfortable anymore admitting to the exact number of years that I’ve been around bowling. People just aren’t supposed to live that long. Still, age and experience have certain advantages. Mainly they provide a sense of roots and continuity. If you’ve been around a long time, you’ve seen a lot—the good, the bad, and the changes, good and bad. Of course, good and bad are always a personal judgment call based on individual beliefs and biases.

In June 1994, I took a hard look at bowling—by reading every magazine and newspaper I could find. Practically every article that I read eulogized bowling like it was already dead. Writers pointed to countless problems that led to its demise, and they listed a myriad of things that could have been done to save it.

My first reaction was that these people must be blind, insane, or maybe just sensationalizing for “good press.” Did I believe that bowling was dead or at least comatose? Of course not. Bowling has changed—and many of the changes have been difficult to accept for bowlers from my era and we have lost many longtime members—but much of that can be traced to changes in our society and its individual and collective lifestyles. The U.S. population has been in flux for 20 years and the uncertainty in bowling is nothing more than a reflection of that.

You can tell that I wasn’t all that worried about bowling’s future. Why would I start publishing a bowling magazine if I believed that there would be no readers in a few years? Bowling may have some problems, but it’s not time to panic yet.

What I saw that bothered me in 1994 was that the powers that be in bowling—all of the alphabets (ABC/WIBC/BPAA)—had allowed the SPORT of bowling to go on the critical list. We still have a fairly healthy recreational segment even today, just no clearly identifiable sport to act as the linchpin for the industry.

That was what caused me to create Bowling This Month. I thought that the bowling hierarchy had made a costly mistake. Because the recreational bowler (lower and intermediate-average league bowlers) pay the bills, leaders have failed to acknowledge the sport bowling enthusiast. They made everything easier but not better, and by making everything so easy, they have managed to obscure the differences that should exist between the dedicated bowler athlete and the three-game-per-week hobbyist.

I thought because of this that the SPORT of bowling needed a voice. We had other publications that gave a few pages to the sport (mainly through tour coverage) but we needed more exposure. I thought that we needed to rebuild the sport both for the serious bowlers who deserved to have a real sport and for those intermediates who would become more serious if there was a stronger competitive level above them to act as a lure.

I still believe we need press, tournaments, and a different scoring direction to motivate recreational bowlers to become sport-bowling enthusiasts. When you look at BTM and what it does, remember that we here are interested in promoting COMPETITIVE SPORT bowling at all levels—by helping bowlers access the information and resources that they need to bowl better and bowl among the elite.

To do this, bowlers need help—informational help. As a coach, I am a proponent of bowling education. I don’t care whether bowlers find what they need in Bowler’s Journal, Bowling Digest, Bowling Magazine, in books and videos, local newspapers, from camps and clinics, from a qualified coach, or in BTM. However, if a bowler wants specific information, I do care that they can find it somewhere quickly and easily. That in part explains why we do some of the things we do. Those things fill an informational void.

For example, we plug coaches, coaching, camps, and clinics. Some readers don’t care for this much, but coaches are essential to all sports. We have to have qualified, recognizable coaches in bowling for it to thrive as a sport. Otherwise, it is just a hobby, a recreation. It’s not that I expect all of you to run out and hire a coach or even register for a clinic. Why we do this is that IF you want to run out and do either of those, I want you to at least know who to call.

Hopefully, what we do is what you want for the most part. I know that not everyone loves everything. Still, the sport of bowling must have a voice and BTM will continue to be a voice. Maybe in the near future the competitive segment of bowling—in my opinion, the best segment—will again be healthy enough for more people to take a chance and join in by dedicating other complete publications with other voices, opinions, and directions to our SPORT. It could happen.

The Youth Bowling Round Table: Getting Started, Having Fun, and Setting Expectations

Making Luck Work for You

The Importance of Sleep