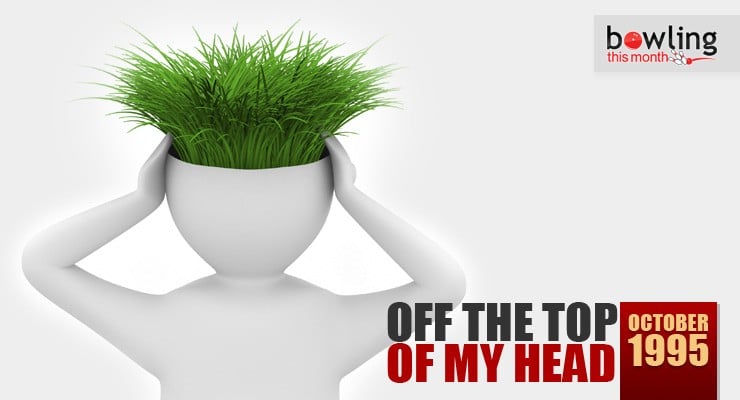 Recently, I had the pleasure of talking to Jim Pestello. Most of you probably have never heard of Jim, but he is the owner of Astro Bowling Center in San Antonio, Texas and the promoter behind the Track Texas Masters Tour, a series of scratch tournaments held around the state that guarantees from $10,000 first to $50,000 first depending on the event. Jim is the godfather of Texas megabucks tournaments. Hey, if you can’t put in a plug for a friend, why do this?

In any case, what we were talking about was the mentality of the Texas scratch bowler. Yep, just like with everything else about Texans, the bowlers here have their own mentality.

What Jim was saying was that he has talked to scratch promoters around the country, and whenever a big name star walks into their building and puts up his money, they start to lose bowlers. In Jim’s tournaments – which are open to anyone – a big name pro doesn’t scare anybody away. As an example, in a recent event which was won by Joe Firpo, PBA regulars David Ozio, Chris Warren, Eric Forkel, Doug Kent, Del Ballard, Bill Oakes, and several others showed up. So did 450 amateurs from Texas and every one of them stayed to bowl.

There isn’t a 200 average bowler in Texas who would ever shy away from Norm Duke or Gary Dickinson, or for that matter Mike Aulby or Walter Ray. There is just too much Wild West in us for our own good.  If you want to come into our town and be the top gun, you’d better be prepared to defend your title. There’s always someone here who wants to take it away.

Amid this rather questionable behavior, though, there is a lesson to be learned. If you want to be undefeated, run for cover. If you want to be the best, you have to beat the best. It’s that simple. No one – not Mike or Norm or Walter Ray – ever got to the top of the pile by running from competition. When you win, you build confidence. When you lose, you learn something for the next time. Either way, you take something positive away with you.

For those of you out there who are trying to improve, to master the sport of bowling, you need to bowl classic leagues instead of mixed leagues and you need to bowl tournaments. You don’t have to start with the pros, just with the bowlers who are better than you. You might start your tournament bowling by joining the National Amateur Bowlers Inc. (NABI), the Amateur Bowlers Tour (ABT), or whatever handicap singles tournament organizations are in your area. This will introduce you to the bowlers who average up to 199 and, more importantly, it will take you to different centers each time you bowl. Bowling in different houses in a competitive environment will help you learn to adjust to different conditions and to approaches and lanes that just have a different look and feel about them. If you plan to become one of the best in your center, your town, or especially the country, learning to adjust properly and quickly is an all-important key.

For those of you who already average around 200, you should consider bowling in the scratch organizations. It doesn’t matter if you are from New England, the New York City area, down South, the Midwest, Southwest, or Far West, there are “amateur” scratch organizations that will give you all of the competition you can handle, and just exactly the level of competition that you need.

If you feel that you are competitive on this level already, remember that the PBA (and for women, the LPBT) regions are ready and waiting for you. The regional tournaments are a natural progression from the amateur ranks to the pros. You get to cash in a couple tournaments before you are required to join the PBA (or as often as you wish in the LPBT) and you will be bowling against the best amateur, regional pros, and occasionally touring pros from your own area.

Bowling with better bowlers will teach you things that you will never learn just by bowling practice or league. You will have the opportunity to learn tricks of the trade from some of the best around. Whether you ask them for advice or whether you just pick things up by crossing with them, you will get something for your entry fee, win or lose. Best of all, you begin to develop the competitive focus, the competitive edge that will separate you from your league bowling peers. You will begin to move up the ladder of bowling success faster than if you just bowl your leagues and read Bowling This Month. Leagues are great (and necessary for the centers to remain open); books and magazines are great to acquaint you with concepts that may help you in the future; practice is great for timing and correcting physical flaws; but to get your game on the fast-track to success, there is nothing that compares with bowling a tournament and just seeing how you match up.