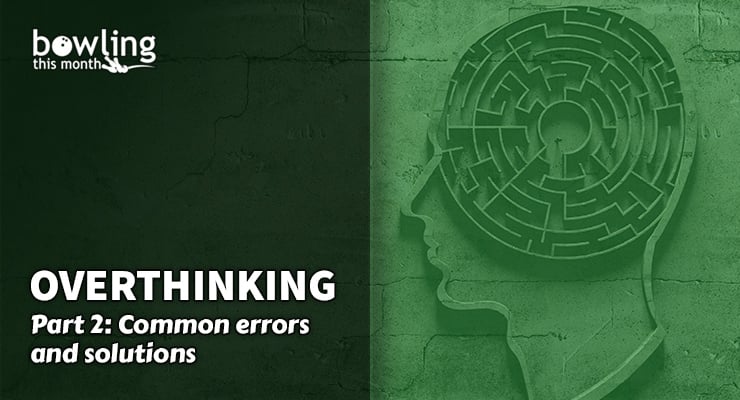 In the previous installment of this series, I introduced the idea of overthinking, I detailed the frequency of thoughts that should occur as people progress through learning a skill, and I covered when thinking too much may be both good and bad for performance. In this second installment, I’ll continue the discussion by focusing on common errors and solutions associated with overthinking.

During my two-day course on this topic in Singapore, I provided an in-depth discussion about overthinking and how it may affect bowling performance. After the overthinking discussion, attendees were split into small groups and asked to discuss and generate as many overthinking errors as possible, along with reasons why those errors might be the result of overthinking. I then suggested my own potential overthinking-related errors (and reasons) that I came up with prior to the course.

Thus, the errors listed below are some of the most common physical errors that may be a result of overthinking. Importantly, though, please keep in mind that these physical errors may not be specific to overthinking only. Sometimes it can be difficult to determine that overthinking was the reason for the error, which is why it’s important that the coach or the bowler communicate and work to find root causes. Initially, technical errors could be the culprit, but if other physical “fixes” do not correct the error, perhaps the error may be from overthinking.

In this section, I’ll attempt to explain the common overthinking errors, why they may occur, and what mental (or physical) solutions can rectify the errors (other than simply NOT overthinking, of course). While there are likely many more, the topics I’ll cover in this article are some of the most common: slow feet, tugging (or pulling) the ball, and having a controlled armswing.

Given the information suggested in the first part of this series regarding slower movements being created by overthinking tendencies, it’s understandable that one of the most common overthinking errors I see from bowlers is slow feet (or being too careful). Recently, I worked with an elite athlete at an Australian Junior Development camp who I thought was an overthinker simply based on her slow (and deliberately timed) approach.

Since I was there as a mental skills coach, I approached the coaching staff and asked if perhaps overthinking was a part of the errors that she was making in her timing and if I could try something with the bowler. The coaching staff agreed for me to help, so I asked the ...

Image credit: Brain maze illustration (©iStock.com/Rick_Jo) is licensed for use by BTM and is the copyrighted property of its original creator.