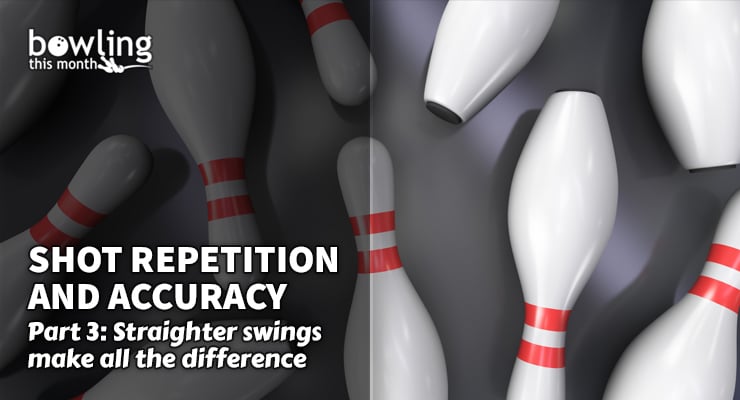 In the first and second parts of this series, we covered the footwork for better shot repetition and accuracy, and now we are going to move up to the swing. One common theme that ran through the first two parts of this series was keeping the lateral movement of the feet to a minimum and under control. Minimizing lateral movement in the swing is just as essential to making better shots more often. Very few bowlers have a perfectly straight swing; most bowlers’ swings have at least a little bit of lateral movement. But the more lateral motion a swing has, the more critical timing becomes, and the bigger your mistakes can be.

When there is a lot of lateral movement in the swing, the trajectory the ball takes is dependent on when you let go of it. If you put the ball into the swing a little early or a little late, that changes the shape of the swing and significantly affects when the ball is released from the hand. So, for most bowlers, accuracy and shot repetition will be helped if the swing is kept pretty much in line with the desired trajectory.

Keeping the swing in line

The most common reason swings get out of line, other than footwork, is that the ball gets pushed left or right during the pushaway. The vast majority of bowlers push the ball to the outside of the body. This lateral push is best observed from the rear of the bowler, so if someone is shooting video, have them put the bowling shoulder in the middle of the frame.

There is one problem with this method of instruction: many bowlers can’t see that the ball is being pushed to the outside, even though they are looking right at it. When that happens, I will grab the ...

Image credit: Bowling pins illustration (©iStock.com/happyphoton) is licensed for use by BTM and is the copyrighted property of its original creator.