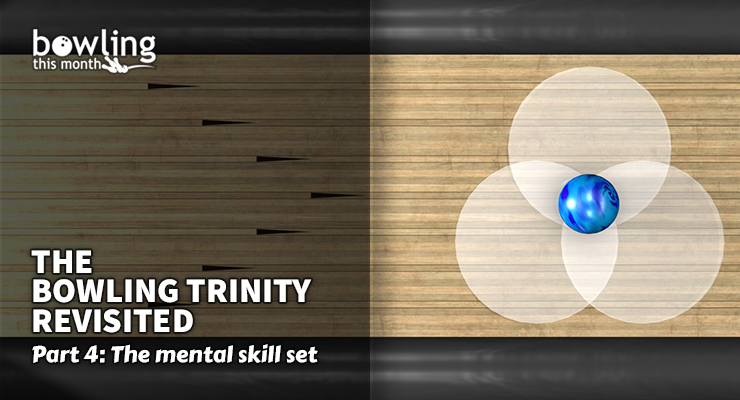 The final chapter of this Bowling Trinity series covers the mental skill set that bowlers need to succeed. More than anything, the mental game is what separates champions from also-rans. It also happens to be the area that has evolved the most since I first introduced this trinity concept eight years ago.

When most people think of the “mental game” (including me in my early coaching career), they think of what I described in my first article: choking under pressure; or turning into a giant green rage monster at the slightest setback. While these can both be symptoms of a weak mental game, the cure is not necessarily some new tip or trick, or adjusting something you already do, like a pre-shot routine. A bowler’s mental skill set requires way more than just tricks.

The evolution of this bowling skill set involves looking at both the foundational elements and the tools that a bowler uses to manage high-pressure situations. In short, the mental game, much like the physical game, can be broken down into two distinct areas: mindset and mental tools.

A bowler’s mindset is like their technique. If you’ll remember, I refer to technique as the more permanent parts of a bowler’s game. Like your technique, changing your mindset requires awareness of the issue or problem and plenty of effort to make changes until no more conscious effort is required. Also like your technique, your mindset is the foundation of your mental game; no amount of tools can permanently hide or make up for a limiting mindset.

Mental tools are like a bowler’s physical manipulations skills. These tools are used regularly, or as needed. For example, a pre-shot routine is used every shot, whereas a specific breathing or visualization exercise might only be used in high-stress situations. These are also skills that can be expanded and mastered but require a solid foundation.

When you leave a 10 pin, do you think, “Well, that’s my luck?” If you miss a cut by a couple of pins because someone else struck out to beat you out, do you think, ...