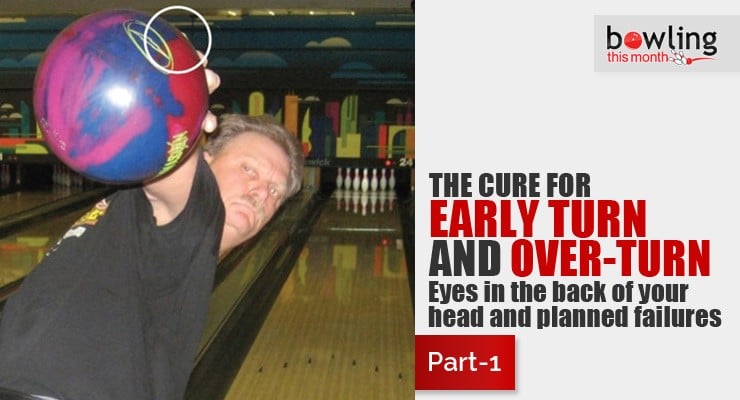 Turning the ball early and over-turning the ball are two of the most common performance failures by aspiring bowlers. As I travel the country giving bowling lessons, I have come to realize that at least half the bowlers afflicted with early turn are already aware of it. Most of you early/over-turners know who you are. You have been told repeatedly by coaches you have visited and you have been powerless to fix it. My goal in this article is to teach you how to fix it and, if you are successful, please pass this info on to your coach so s/he can help the next person.

What is early and over-turn?

Other bowlers keep their hand on the outside of the ball throughout the entire swing, which puts the hand on the wrong side of the ball at the top of the backswing. Imagine the front tires on your car turning totally sideways when you were trying to go around a turn and you will get the idea.

The good and bad of early turn and over-turn

Turning the ball early puts the hand on the outside of the ball as it descends from the top of the backswing. This is a very weak position and is not very conducive to creating the revs needed to be competitive when the oil on the lane gets above a minimal amount. Bowlers who turn the ball early are usually much happier when the lane man forgets to oil that day. That’s pretty much the extent of the good.

There are bowlers who are strong enough to produce a lot of revs despite early turn, but most of them have to hit up on the ball late in the swing. This lofts the ball into the air which creates its own problems on flatter oil patterns, but not so much on easy house shots.

Turning the ball early can also interfere with your swing path, often resulting in a pulled shot that sends the ball down the highway to Splitsville, a place none of us want to live. When a bowler’s hand starts to move to the outside of the ball shortly after the top of the backswing, it naturally wants to force the swing inward as it progresses toward the bottom of the swing and the release point.

You can test this theory yourself by simply holding an imaginary air ball behind you at the top of your swing. Place your hand in a position where it would be directly on top of the ball or slightly to the inside (palm facing out more) of the ball. Then just relax your arm and let it fall freely. The air ball should fall in a pretty straight trajectory to the bottom of the swing where the ball is to be released.

Next, hold your air ball again at the top of your backswing, but move your hand to a position on the outside of your imaginary air ball. Once again relax your arm and let it fall limply to the bottom of the swing. You will see that your swing will move from right to left for a righthanded bowler. That’s the road to Splitsville….population Big 4.

I know that swing paths are not that simple and that there are a lot of things that go into the eventual ball path, but the positive forces that try to keep the ball on the proper line can be overwhelmed as soon as you start adding muscled force to the swing….and almost ...