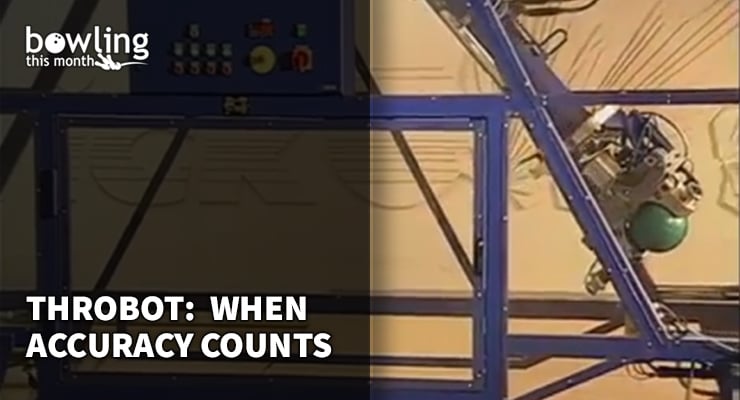 One of the questions we ask over and over is, “How do we know that?” It doesn’t matter whether someone is pontificating on some aspect of bowling ball motion or whether they are talking about the proper way to execute a shot. It seems that we bowlers are often treated as sheep and they (whoever “they” is at that time) just want to lead us to the slaughter. We are given some statement as if it were “truth,” but we are never given anything of substance to back it up. Either there is no scientific basis for the statement or none is offered.

What does this mean? It means that bowling is still a sport that is influenced largely by observation and if any of you have worked with more than one of the better coaches during your career, you know that what one coach may observe does not necessarily mirror what another sees. Observation is nothing more than “you see, I see,” and it has all of the accuracy and credibility of witnesses at a car wreck. Some are right, others wrong, and some are more right or wrong than others. There is no truth—only opinion—and bowlers are left to decide whose opinion is most correct.

What about CATS, the Computer-Aided Tracking System? CATS is the best and worst thing that has happened to bowling. Everything measured by CATS is subject to lane conditioning. If you went through CATS in Greendale on their condition and then went through CATS again at the ABC or WIBC tournament, you would see different readings. This is not necessarily because you have changed. It could be because the lanes were very different at the two sites. If you were at Bowling This Month‘s Super School camp this summer and you went through CATS at 8:00 AM and then went back through CATS at 5:00 PM, your readings would have been completely different. You didn’t make remarkable changes during those nine hours. The lanes changed remarkably.

This is not a rap against the CATS system. It does what it is supposed to do. It measures performance objectively—and it measures it at that moment in time given the variables that exist then. CATS is the best because it does provide quantifiable data for the bowler. It is the worst because CATS data is accepted as universal truth rather than a slice-of-time indicator based on present circumstance—a present circumstance that cannot be calculated.

Now enter ThroBot, the most exciting development in bowling since CATS, and, like CATS, something that could revolutionize the sport informationally or just become “garbage in/garbage out” technology.

(Editor’s note: the above Brunswick promotional video, uploaded to the Brunswick TV  YouTube channel, was not part of this original article as published in the October 1998 issue of Bowling This Month magazine. It has been added here for illustrative purposes.)

ThroBot, the new million-dollar-plus ball throwing machine developed by Brunswick, has the potential to move bowling one step closer to objectively gathered data regarding bowling balls and ball motion. Because of its accuracy and consistency, ThroBot has a multitude of applications, including the potential to collect ball motion data for a variety of bowling styles. Given knowledge of their style, any bowler could soon be able to select a ball (core construction, coverstock, drilling, and surface) that best matches their game.

ThroBot can do this because it is able to imitate any bowler and simulate bowler-generated release variables:

Unlike when using a bowler and gathering data from them, ThroBot eliminates inconsistencies from shot to shot. It can repeat every shot exactly so that data collected is accurate, allowing the tester to compare ball and motion data without having to disregard “bad” shots or adjust for mistakes in one or more of the release variables listed above.

ThroBot by itself would be an improvement to that which currently exists: pure observation—but Brunswick took their research one step further by ordering a customized version of CATS. This system, which adds more speed and position sensors to the CATS commonly used, allows the testers to better pinpoint such data, as when a ball slows down to see how and how much each ball reacts to friction and better determine ball movement along the lane.

For bowlers, studies conducted using ThroBot and SuperCATS should provide information about lane play that does not currently exist. From a product development perspective, these two in combination will allow Brunswick to develop oils that do not break down as quickly and coverstocks that are more forgiving and less affected by changing lane conditions.

Although there is no way to know just how much ThroBot and SuperCATS will be used for research purposes, imagine the possibilities. Today, reviews of bowling balls like those in Bowling This Month and Bowlers Journal International, information from your pro shop, and even the scoop given to you by your buddies are all based on one common denominator, “How did the ball act when I threw it?” What if you knew instead how the ball would act if you threw it?

This is what ThroBot and SuperCATS potentially give the bowling community. It can not only look at what the ball does constructionally—before any holes are drilled—it can also produce profiles of the effects of different drillings. By altering the axis rotation and tilt, the revolution rate, ball speed, and other variables, it can give bowlers of different styles a more accurate picture of what a specific ball would do for them rather than what it did for some bowler with whom they may have nothing in common.

Another plus is that ThroBot and SuperCATS can measure differences in ball motion potential on different oil patterns. A ball may be perfect for one style on one set of patterns and a total disaster for them on another. Wouldn’t it be nice to know before you buy a ball how it will fit into your arsenal? Instead of buying the same reaction four times each year, you could finally be assured that you would be buying the reaction you expected.

Think about the potential for lane play and adjustment. By altering the lanes in different patterns (parallel breakdown similar to what you would see in elite tournaments, chaotic breakdown that might exist if you were following a lower average league, etc.), we would finally be able to study adjustment options and determine from an equipment/bowler standpoint what we need to do, or as coaches, what we need to teach.

Looking at drilling, we all have our opinions concerning static weights, RG, RG differential, coefficient of restitution, balance hole placement, depth of holes, and other things that may alter ball motion. Wouldn’t it be nice to finally put these arguments to rest? If you study ball motion as a by-product of physics, the findings are obvious. If you then look at the way the ball tracks, those obvious results become blurred. Ball physics is mathematical and precise in an ideal world. Bowling is ball physics adjusted for too many variables to count and not ideal in any way. ThroBot could give us insights into what is actually happening instead of what will happen theoretically.

What about CATS data? Doesn’t CATS tell us what we need to know about ball movement, entry angle, ball velocity, etc.? Not a chance. Any time you enter the human into a scientific equation and then you only measure a few elements of the game (ball speed and entry angle for example) without taking into account the other variables that make up the total picture (like consistency of revolution rate, etc.), you get a picture but that picture might just be a little out of focus. ThroBot can control all of the variables so that researchers can isolate on each factor individually.

Every so often, certain things come together to advance knowledge. In this case, it took Bill Wasserberger, Ray Edwards, and the R&D folks at Brunswick to dream up a ThroBot, and it took Brunswick management to see the benefit so that they would spend a million dollars developing it. While it is entirely possible that not everyone involved in this project has the same goals (some research, others marketing), the possibilities for ThroBot and SuperCATS are seemingly endless. The potential benefit to bowling is at this point only imaginable.

Like with any new invention that utilizes science, there is potential for great good, and there is potential for great mediocrity. There will be several factors that decide which ThroBot will become. If research projects are designed so that they measure objectively—and information is offered to the public regardless of its nature—ThroBot could answer questions that have lingered around bowling for generations. All indications, based on ThroBot research concerning mass bias, are that Brunswick plans to conduct their research for the bowling public and release their findings to the public through print and video.

This is not to say that Brunswick is so benevolent that they would spend their money to advance their competitors technologically so “everything” that Brunswick discovers will probably not become common knowledge. Still, the bowler should benefit from ThroBot and SuperCATS in one of two ways: either through the development of better future Brunswick technology, or through the more accurate information that is provided to the bowler. Regardless of which it is, every bowler should be excited about the potential for ThroBot and SuperCATS.