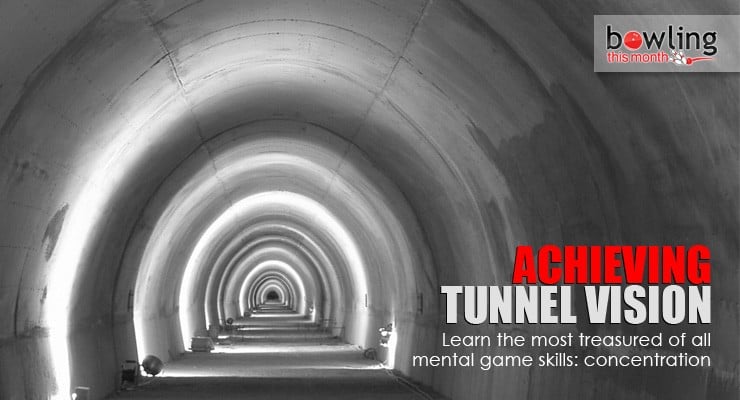 Television commentators often highlight the distinctions in skill levels between championship finalists and other high level bowlers. Putting even high average house bowlers in the same category, skill-wise, can seem absurd. But there is one special thing about bowling that exists in few other areas of sport and life.

Virtually anyone can master mental game skills that mirror those of the greatest bowlers of all time. In this sport, like no other, mental game mastery can lead to unprecedented success in a one game match, even against a more talented opponent.

One of the most common questions that athletes raise in the sports psychology realm is how to get into “the zone.” Champions will often talk about bowling out of their minds when they are delivering amazing shots, one after the other. Oddly enough, this experience of bowling “unconsciously” requires one of the most treasured of all mental game skills…concentration.

Concentration is one of the mental game pearls that should be visited often, whether you are a coach or an athlete, until you have mastery of it. It is the place in the mind where one can match virtually any athlete from any sport, at any level. You don’t have to pump iron, have a master’s degree, or be able to tuck an eight hundred series under your belt. You don’t have to be able to do the splits, hit a fastball, or hook the lane. But you can run with the big dogs, at least as far as your mental game, with respect to this skill.

This month we are going to take a different run at honing up your concentration talents. The great news is that you can be world class at this ability. The hard news is that, as in other athletic endeavors, you have to have a substantial amount of discipline to attain mastery of this cognitive skill. However, the payoff is immense. Once you have mastery of focus and concentration, you always have a chance in any given game. As we know, qualifying for the finals can be a grind. However, in a one game match, the one who can concentrate the most effectively often takes the prize.

It’s a funny thing about concentration. Everybody recognizes the phenomenon, but almost no one can ...