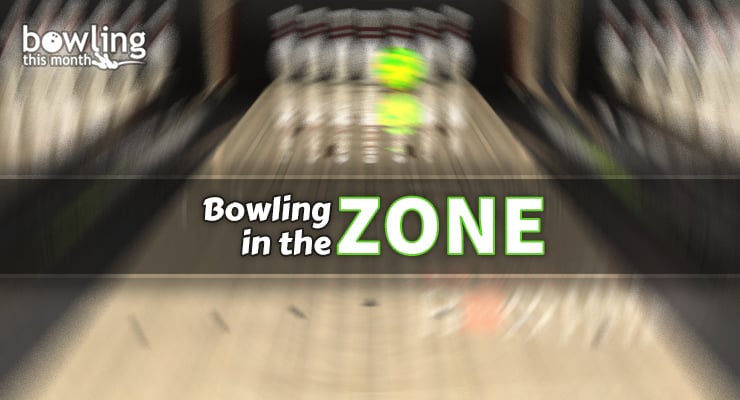 You may have heard a bowler say, “I was really in the zone today,” when describing how or why they performed well during a tournament or league. But what exactly is “the zone?” Being in the zone is not easy to define, as it is a subjective feeling that’s not easily described. Essentially though, what they are saying is that they were concentrating well, staying focused, and performing without any external or mental distraction, which allowed their physical performance to be at its peak.

This article will establish a working definition of what the zone is and then explore some strategies that can be used to help you to bowl in the zone on a regular basis.

So what is the zone?

The term “the zone” has been attributed to tennis player Arthur Ashe, who, when describing a match between himself and a young Bjorn Borg in 1974, said that Borg was “in what we call the zone,” where Ashe was referring to the TV show The Twilight Zone, and Borg was literally playing as if from another world.

“It’s like all of a sudden I got oil in my arm. The pool cue’s part of me. I feel the roll of those balls, you don’t have to look, you just know. You make shots that nobody’s ever made before. I can play that game the way nobody’s ever played it before.”
-Fast Eddie Felson (The Hustler)

Researchers started to learn more about the zone through interviews with athletes who felt that they had experienced it at some time during a tournament or competition. When compiling their responses and descriptions, a consistent picture of their shared experiences began to emerge, where it is now suggested that it is a universal phenomenon for athletes across all sports.

Young and Pain (1999) describe being in the zone as a “magical and special place where performance is exceptional and consistent, automatic and flowing. An athlete is able to ignore all the pressures and let his or her body deliver the performance that has been learned so well.” Tennis legend Billie Jean King has described it as “a perfect combination of violent action taking place in an atmosphere of total tranquillity.”

Athletes in a variety of sports describe relevant features of the experience (total concentration and involvement, control, a unity of mind and body, and a sense of personal fulfillment at an optimal level of performance) with remarkable similarity when asked to reflect on how it feels when their experiences are most positive.

This description by musician Jon Gorrie evokes a similar feel: “The zone is intangible. It is that state of mind where everything clicks, everything is easy, where your actions are effortless, and when your results are up to or even exceed your previous expectations. The zone is quite simply being in the perfect state of mind for a given performing situation, resulting in an optimal level of performance.”

As a term describing an optimal or heightened state of awareness, the zone can be likened to include the concepts of “peaks,” “perfect moments,” “mindfulness,” “peak experience,” and “flow.”

The common thread with these descriptions is that the zone is a state of mind where you can perform without distraction, where you can ignore all the pressures, and where have total concentration with a singular focus on the task at hand. It is a pure mental state that allows the physical actions to be executed without any distracting thoughts ...