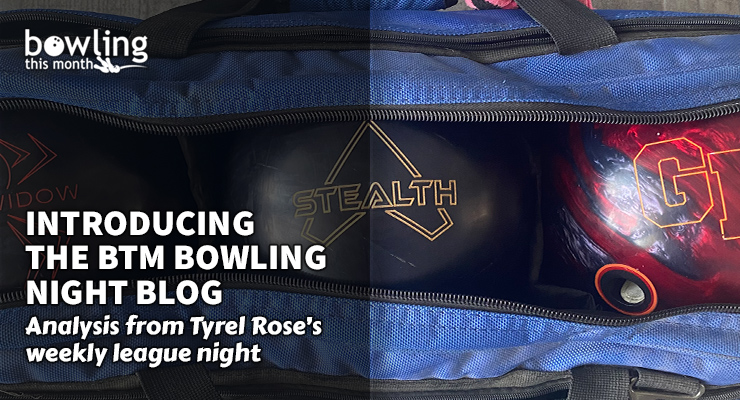 For the 2022-2023 league season, Bowling This Month is introducing a new weekly blog from our Director of Content, Tyrel Rose. This blog is meant to offer insights into the mind of a top-level coach and former competitive bowler out on the lanes bowling in a weekly league.

Starting now, the weekly blog posts will be found here, but to give you a bit more insight, here is an introduction to the league, competitive mindset, and what to expect over the next 30 weeks of blog posts.

Tyrel bowls in the Dorval Commercial Bowling League, which is a small, competitive Monday night league that he joined in 2002 with friends from youth bowling after they aged out of the youth program in the same center. This year, the league features 11 four-person teams (due to an unfortunate last-minute withdrawal by one team), with handicap based on 80 percent of 240. The league bowls on a house shot, and it has some of the best bowlers in the area, with a league-wide average of over 208.

The league competes on the last 12 lanes of a 66-lane center that features some unique topography on some pairs. Transition can be fairly straightforward, but there are a few teams made up of exclusively high rev rate players that can create some chaos in the middle of the lanes. For this reason, some pairs can become very easy while others become increasingly difficult as the night goes on.

Tyrel was an extremely competitive bowler prior to starting his coaching career. Over the years, he has managed to maintain some of his level of performance despite less time practicing on the lanes. His team has won the league several times and he’s been high average and top point percentage a few times over the years…but not recently. The last few years have seen less and less focus on his own game, which has resulted in a bit more inconsistency in shot repetition.

Last year, Tyrel went down to 14-pound equipment due to a wrist injury and he will continue to bowl with that weight this year, even though his wrist is back to almost 100 percent. He drilled two new bowling balls this year—the Track Stealth and the Ebonite Game Breaker 4 Pearl—to go along with his Black Widow 2.0 that he used last year.

In a “do as I say, not as I do” situation, Coach Tyrel did not make the time to practice properly and get ready for the season, meaning he is going in cold after not bowling since May.

The weekly blog will feature results, adjustments, and insights into each week’s league performance. Depending on what happens during each Monday night league session, the blog might delve into mental game tools and struggles, or it could discuss things like tactical lane play decisions. The blog posts will also serve as a form of self-debrief and keep track of the week-to-week performance.

The first post is live and you can find it here. Bookmark this page to stay up to date, gain insights from a top bowling mind, and feel free to share your experiences and ask questions.