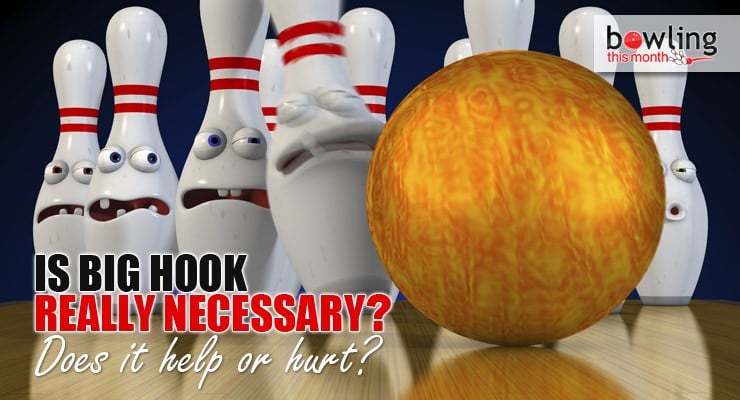 How much hook do bowlers need to be successful? It depends on whom you ask. Throughout the history of the game, bowlers have been taught and conditioned to hook the ball. This is quite understandable. A ball hooking into the pins produces a far greater percentage of strikes. Nonetheless, this is, by no means, meant to demean a delivery that is directed in straight line from a wider laydown point at the foul line.

For example, in today’s environment, particularly among younger bowlers, big hooks, high revs, and wide arcing missiles tend to create a false sense of superiority…a macho attitude, so to speak. Unfortunately, bowlers who are in awe of players who display high rev deliveries are apparently unaffected by really successful players who utilize proper angles and speed with deadly accuracy.

Hook is the means but it is not the end. In delivering a strike shot, an effective hook is one that carries out the 5 pin with little or no deflection. This is the primary objective of a strike shot. So, how much hook do you need?

During the rubber ball era, players like Bill Lillard, Junie McMahon, Carmen Salvino, and Harry Smith ripped the racks with devastating strike shots that scattered pins all over the deck. They applied excessive finger rotation to the ball and created a wider pocket than other bowlers. No one can question their ability to execute these deliveries with ACCURACY. Therein lies the secret of power-laden shots…accuracy!

This is unlike modern macho-men who stand left and throw the ball to the right on doctored lanes, then become befuddled on honest conditions which punish them and bring them back to earth…as has been the case in many US Open tournaments that require quality execution. These are the aspects of the game that create superstars like Chris Barnes, Tommy Jones, Wes Malott, Sean Rash, and others who are able to widen the pocket with revolutions and accuracy.

Then, of course, there are the two incredible two-handed, thumbless bowlers, Jason Belmonte and Osku Palermaa, who have revolutionized (pun intended) the game by eliminating the thumb. An effective hook is solely dependent on exiting the thumb PRIOR to the release point, placing the fingers at the bottom of the ball, then rotating the fingers to the right (opposite for lefties). If the thumb doesn’t exit properly, ...

Image credit: Bowling pins / ball illustration (©iStock.com/z80) is licensed for use by BTM and is the copyrighted property of its original creator.