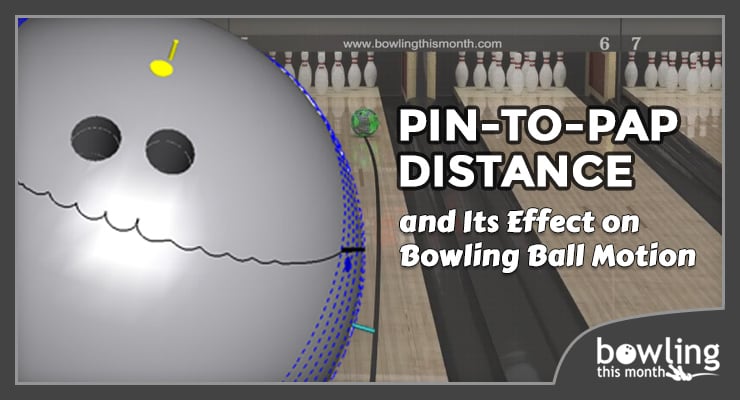 Pin-to-PAP distance is one of the dozens of factors that can affect the on-lane motion of a bowling ball. It is defined as the distance, measured along the surface of the ball, from the bowler’s positive axis point (PAP) to the ball’s pin, where:

In these images, the yellow circle is the pin and the small black cylinder represents the axis of the PAP. The pin-to-PAP distances shown are 2 inches (left), 4 inches (middle), and 6 inches (right).

The effect of pin-to-PAP distance

Pin-to-PAP distance is one element of a bowling ball’s layout. The layout, of course, defines how the core is oriented inside the ball relative to the bowler’s PAP and relative to the gripping holes.

This simplified way of thinking about pin distances probably served bowlers and ball drillers well back in the early days of dynamic cores, but I personally don’t care for it because it paints a very incomplete picture of what affects the ball’s track flare. Yes, pin-to-PAP distance does influence how much the ball flares, but it’s far from being the only factor.

So, is any of this RG-of-the-PAP stuff true? Well, it’s certainly true that the RG of the PAP changes as pin distance changes. It’s also true that shorter pin distance layouts can sometimes produce a ball motion that looks earlier and smoother and that longer pin distance layouts can sometimes produce later and more angular ball motion. But, it turns out that this has very very little to do with the RG of the PAP. So, this theory, too, while still being somewhat useful, is a little bit inaccurate. We’ll explain this in more detail a bit later with some examples.

As many of you know, I developed a bowling ball motion simulation software tool that went to market as Powerhouse Blueprint a few years back. If I had to boil Blueprint down to one sentence, it would be this: Blueprint combines a computer-aided design (CAD) geometry modeling system with a physics-based dynamics simulator that predicts the on-lane motion of drilled bowling balls.

In other words, the geometry of all the ball’s components are modeled by Blueprint’s CAD system, allowing you to virtually “drill” the ball and see how its mass properties change as a result of drilling. These as-drilled mass properties—things like RGs, differentials, and static weights, among others—are then passed into Blueprint’s on-lane motion simulator, which—when combined with some additional inputs describing ball’s coverstock, the lane surface, the oil ...

Bill is the founder of BTM Digital Media, LLC and he manages the day-to-day operations of Bowling This Month. He has a graduate degree in Mechanical Engineering, he developed the Powerhouse Blueprint ball motion simulator, and he has been an avid bowler for more than 25 years.