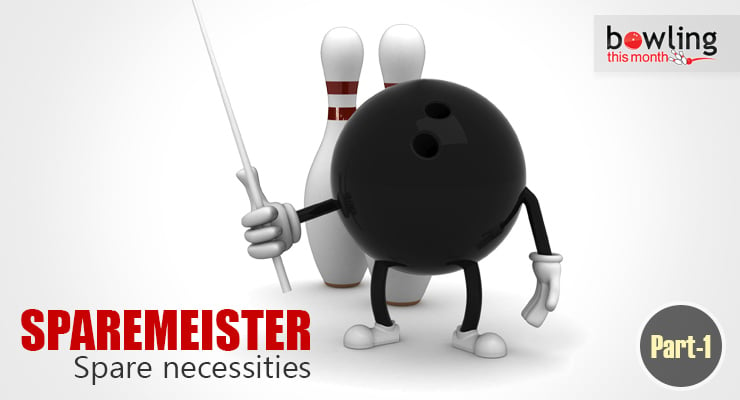 There are times when striking is very difficult and as Marion Ladewig said, “sparin’ ‘em to death” is the only way to win. There are 1023 possible spares, 249 of which are probable. We’ve all heard that to make a spare, you need to hit the ‘key’ pin. Some folks define that as the pin closest to you. A key pin to me is the pin you’ve got to hit to convert the spare (whether that pin is there or not).

The importance of a solid spare game just can’t be overemphasized. No one can strike enough to overcome a missed spare. Spares are an integral part of the game since, if we struck every time, we’d become quite bored and take up something more challenging. Although I suspect you might like to disprove that theory, in your bowling heart, you know it to be true.

Sometimes your best effort leaves pins standing. The truth is that once you let the ball go, it’s on its own. No amount of praying or body English will deter its path. It’ll either carry or it won’t. All you can do is give it the best possible opportunity to strike by imparting the right roll and rotation, from the correct angle, with the proper speed, and see what happens. Any pin that stands after your best effort deserves to be saluted. It’s a formidable foe.

I’ll frequently make reference to left side and right side spares. They are NOT lefthand spares and righthand spares. I think we have enough ‘handedness’ issues in this sport. I had a person who was new to bowling ask me how they were supposed to make a lefthand spare if they weren’t lefthanded. Makes perfect sense, actually.

I think most missed spares occur for one of two reasons: lack of concentration (most of the time), or misjudging the lane condition (rarely). Lack of concentration means you’re in the wrong time zone, either wondering why you left it or being angry that you did. You’re in here-we-go-again land, move into automatic pilot mode and, when you miss it, revert to the false solace of it-shouldn’t-have-been-there-anyway. If it shouldn’t have been there, it wouldn’t have been. As Byron Katie says, the way you know if it should have been there is that it was there. Denying reality is really silly ...

Image credit: Bowling ball / pins illustration (©iStock.com/Talaj) is licensed for use by BTM and is the copyrighted property of its original creator.