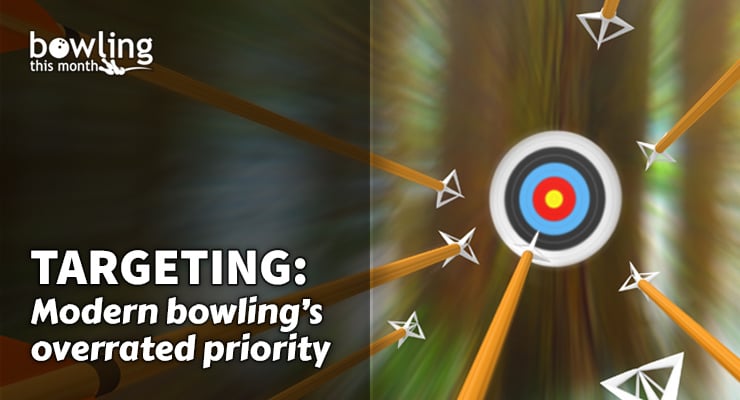 This month, we are going to look at the concept of targeting and discuss its role in successful bowling. As a longtime coach, I have spent many hours both programming and deprogramming students to get their thoughts, practices, and beliefs in alignment with the principles I adhere to. One of the strongest beliefs that I have had to address and redirect is the concept of targeting, or more specifically, hitting your target.

I have worked with numerous players over the years who had either decided on their own or had been coached to believe that hitting their target was the primary ingredient to high scoring. I’m sure that many of you reading this article have also had this concept burned into your bowling DNA. For all of you who believe this, I am about to shatter your bowling belief system to the core. Now, before you have me committed for heresy, I ask that you read on to understand the reasoning behind my belief system. I think it will be worth it.

The sport of bowling is rooted as a targeting game from its inception. The addition of lane markings such as the dots, arrows, and lane tracers down the lane have further added to this concept. Accuracy was always held to be the most important skill a bowler could possess to be a great player. This all made perfect sense when looking at how the game was played, and how rolling the ball in a specific location would yield the greatest pinfall. This is the historic, tried and true belief system about the sport of bowling.

In the days of rubber balls and lacquer finishes, this was absolutely a true belief. Having coached many players over the years, a vast majority have—either on their own, or through previous coaching from other coaches, parents, or teammates—been taught to believe that the way to unlock the lane is to find out “where the shot is,” and ...

Image credit: Target background image (©iStock.com/Kagenmi) is licensed for use by BTM and is the copyrighted property of its original creator.