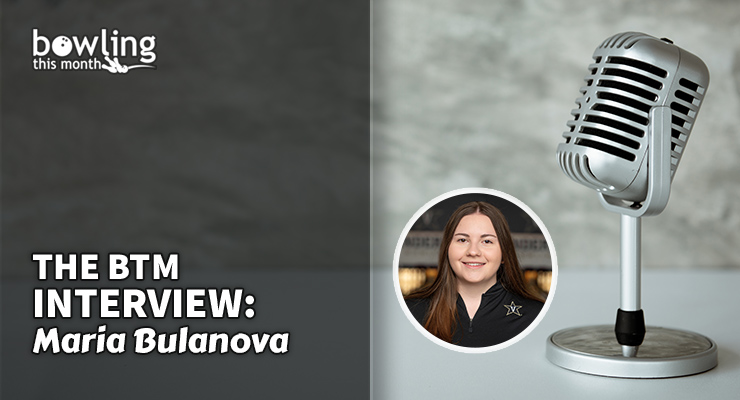 Leading up to the 2022 PWBA season, Bowling This Month has interviewed three athletes to discuss their 2021 campaigns and their preparations for 2022.

In this second of three installments, we talk to PWBA sophomore Maria Bulanova. Maria was a rookie on the PWBA Tour in 2021, after being a collegiate standout at Vanderbilt University, winning the NCAA Championship in 2018. She’s also excelled in international competition, winning multiple medals at the European Youth Championships and placing fourth at the 2014 QubicaAMF World Cup.

(Please note that our questions appear in bold italics and Maria’s answers appear in standard typeface.)

Give us a few words to describe your rookie season last year.

That’s fair. What were some of the biggest differences between college bowling and competing on the PWBA Tour?

Obviously, the level of competition is much, much higher. In college, I felt I could walk into any given tournament on any given day and finish [in the] top five. I walk into a PWBA tournament and think, “I really need to do well today to make the cut!” Bowling with people like Shannon O’Keefe, Liz Johnson, Danielle McEwen…there’s just so much talent. I know some of the international players from bowling with them, but it’s still a very new atmosphere on the PWBA Tour.

How was it mentally for you, having a great college career and now being in much deeper waters with these professionals who are the best in the world?

I wouldn’t say I was less confident. It did make me realize that if you want to do something on tour, you really have to work for it. You can’t just bowl okay and expect to compete.

My first event was in Arlington and I crossed with Liz Johnson. ...

Image credit: Microphone image (©iStock.com/Anawat_s) is licensed for use by BTM and is the copyrighted property of its original creator.