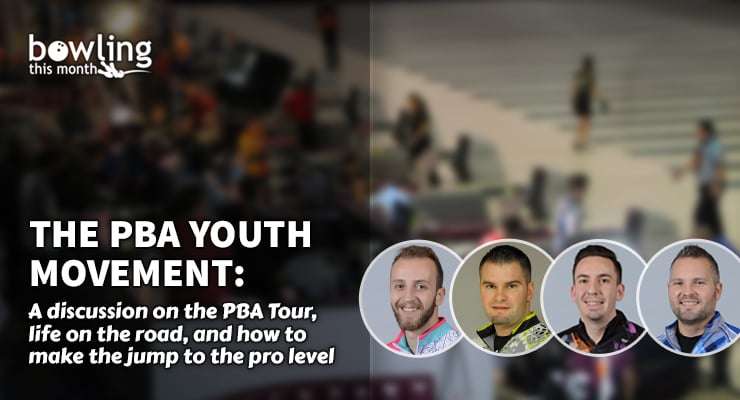 With the PBA Tour kicking off again, I thought it would be a good time to sit down with a few of the young up-and-coming players to get their thoughts on some topics related to bowling at the professional level.

Motiv’s Graham Fach, Storm’s AJ Johnson, Track’s Matt Sanders, and Brunswick’s Jason Sterner were all nice enough to spend some time with me to discuss their thoughts on the game and to give their advice to any youngsters out there who have PBA aspirations.

Thoughts on the current PBA Tour

When I was younger, one of the things I personally always enjoyed about watching the PBA Tour was seeing them in a different city and bowling center every weekend. The new tour doesn’t do that nearly as much and I was curious to know how our up-and-comers felt about that change.

Jason Sterner, who started his professional career at the tail end of the traveling era, had this to say: “When I made it out on the PBA Tour, there was nothing better than being able to travel from city to city seeing parts of the country that I would never have seen otherwise. I am very blessed that bowling has allowed me to see the world. In my first two years on tour, I believe we visited about 18 different cities. Even when the bowling didn’t always go so well, I could tell myself that it was only one event in that one particular house and I didn’t have to bowl there the following week.”

That has since changed, and the new format is not his favorite.

“I’m not a huge fan of the bulked-together tournaments, but I understand why we do them,” Mr. Sterner said. “It’s just tough because if you don’t match up to that building or lane surface, you’re now trapped there for as many as three to five events and you just have to do what you can to get a check. Now, it can go the other way too and you have an amazing swing, which is also very nice. I’ve been on both sides of this situation, so I have learned how to deal with it when I’m not on the receiving end.

“I just loved the old tour format of being in a new center and city week to week, where it didn’t seem like one bad swing could ruin your season. Sometimes, new surroundings change everything. You would get a chance to clear your mind and move on to the next week somewhere else. But now, you’re stuck there the next day with that same negative outlook sometimes, which makes it even harder for you to get out of your own way. Plus, you miss out on all the great unexpected disasters and adventures that happen while on the road, which always make ...

Chris Hester is a lifelong competitive bowler from the Louisville, Kentucky area. He was a two-time All-American on the Morehead State University bowling team and he competes today in many of the top amateur events throughout the Midwest. Chris is currently the Staff Manager for Ebonite International, where he provides support to Ebonite's international amateur staff and collegiate programs.