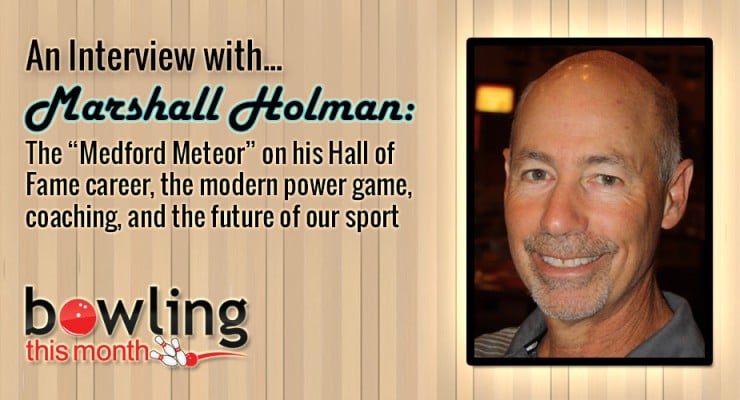 During professional bowling’s heyday, Saturday afternoons were filled with excitement for bowling fans. In the time from 1975 when he earned the first of his 22 PBA titles right up until his last tournament win in 1996, Marshall Holman, ranked as the 9th greatest bowler in PBA history, added more than his fair share to that excitement.

The Medford Meteor, as he was affectionately known to his legions of fans, could always be counted on to add his personal flair for entertainment and volatility to the game. With Marshall, emotion was always there. I caught up with him at the World Series of Bowling in Las Vegas where he was serving as a commentator for the PBA Xtra Frame coverage of the event.

You won your last tournament in 1996 at the age of 42. How long after that did you continue to bowl on the tour?

Not very long. I had just started working with ESPN. In fact, one of the reasons they hired me was because I assured them my career was over so they could count on me to be there for the telecasts. A couple of weeks later, I led the tournament and had basically lied to them. I bowled a little bit after that and then I started working for CBS. I was asked by the producer not to bowl. He said they wanted me on the show, so don’t bowl, and that was really when I stopped. That was 1998. But I really hadn’t been relevant since the early nineties. I was still bowling, but not very well.

Your name rarely comes up in discussions of careers that were cut short by the introduction of modern equipment. Were you, in fact, one of the casualties?

The new balls certainly had a lot to do with my career going south, but in defense of bowling and the transformations that bowling makes, I was fortunate, maybe a little spoiled, and used to having my way with the lanes at tournaments. When things changed, it was okay to be stubborn for a while, but I needed to look at things differently. I was used to looking at the front end of the lane and not figuring out how to get my ball to the breakpoint properly. I never did that, and that’s why I struggled. Could I have gotten better after the reactive resins? I think I probably could have, but I never put the time in to figure out how to play them properly. It was easier just to leave.

If I was upset with reactive resin, then there were a lot of other bowlers who were upset with how well ...