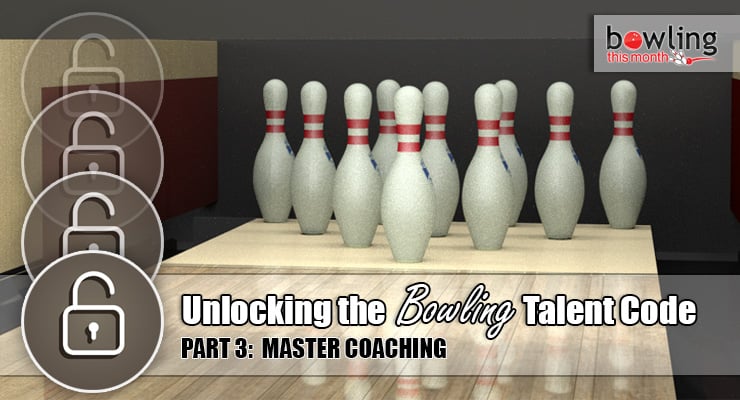 Few master coaches grow up with the desire to coach. Some are retired greats of their sport, some were on their way to greatness but were struck down by injury, and some may have been promising talents in their respective field who didn’t make it and then tried to figure out why. Whatever the starting point, the need to understand more becomes an obsession and often a lifelong pursuit that leads to such a deep appreciation and knowledge of their sport that they become an authority on it.

Part 3 in my Unlocking the Bowling Talent Code series of articles relates to the third requirement of elite skill development, master coaching. In his 2009 book, The Talent Code, Daniel Coyle identified four virtues of master coaches: the matrix, perceptiveness, the GPS reflex, and theatrical honesty. We’ll discuss each of them in detail below and explore how master coaching applies to the sport of bowling.

One of the key inspirations for Coyle’s four virtues of master coaches was renowned basketball coach John Wooden. A star basketball player in his youth, Wooden created a basketball coaching legacy that established him as one of the most respected coaches in the history of sports. Known as the Wizard of Westwood, Wooden’s teams were unrivaled when he was head coach at UCLA. During his last season as coach in 1974-75 (when he was 65), he allowed two young educational psychologists, Roland Tharp and Ronald Gallimore, to study his coaching methods.

Expecting chalk talks, inspiring speeches, punishment laps for slackers, and praise for hard workers, what Tharp and Gallimore discovered was that Wooden was first and foremost a teacher (he also held a Master’s in Education). Wooden never used physical punishment such as lap running, as he wanted to keep practice a desirable activity. However, praise was also only a minor feature of Wooden’s teaching methods. They observed that he would scold (tell off) the players twice as much as he would reward them and part of this ...