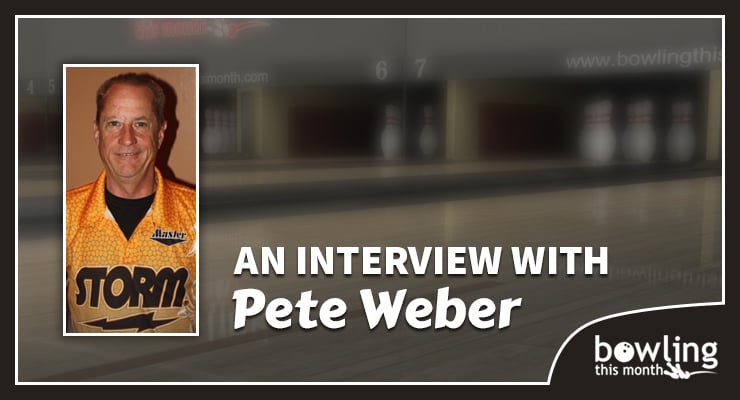 When the 50 Greatest Players in PBA History book was released in 2008, it sparked quite a debate as to who is the GOAT (Greatest Of All Time) in professional bowling. At the time, the two obvious candidates, based primarily on number of PBA titles, were Earl Anthony and Walter Ray Williams, Jr. Anthony won out based primarily on the fact that he had accumulated his 41 PBA Tour titles and two USBC Masters titles over a span of only 14 years of full-time competition. The two leaders were followed by the Weber legacy: Dick Weber listed in third and his son, Pete, listed as fourth. Boy, have things changed since then!

Since the PBA Senior Tour was officially renamed the PBA50 Tour in 2013, it has seen many of the PBA National Tour superstars from bowling’s golden age in the 1980s and 1990s turn 50 years old, allowing them to compete regularly to the great delight of many long-time bowling fans. One of the top names who bowls regularly on the PBA50 Tour is Pete Weber. Besides the unprecedented accomplishment of winning four straight PBA50 titles in 2016, Pete has been able to do what no other PBA50 player has been able to do: he not only is a dominant force on the PBA50 Tour, but he also remains extremely competitive on the National Tour, often making the stepladder finals in the PBA National events and even capturing two more major titles in recent years at the 2011-2012 U.S. Open and 2012-2013 PBA Tournament of Champions. This feat—along with his longevity in the limelight of professional bowling—makes Pete Weber the GOAT to many who follow the sport. I am happy to include myself in that group.

Thanks to a mutual friend, Mrs. Phyllis Punturiero, I was introduced to Pete, who agreed to sit down and talk with me on Thursday morning of the 2017 USBC Masters. The highlights of our conversation follow.

(Please note that my questions appear in bold italics and Pete’s answers appear in standard typeface.)

Having bowled on the PBA Tour for the past five decades, you’ve witnessed tremendous change to the sport of bowling. What do you consider the most significant changes, and have they hurt or helped the sport?

Well, my initial response is, why are aluminum bats not allowed in professional baseball? So there’s one sport that has disallowed the betterment of the game. Tennis doesn’t allow the use of aluminum rackets anymore because they allow the ball to come off of the racket harder on the serve. So that’s another sport that has prevented the betterment of the sport. But, I understand why: they want to keep it at a professional level.

When reactive bowling balls came out, I said that these should not be allowed in professional bowling. This is going to ruin bowling, and look what it’s done to bowling. I mean, when you have to loft the left gutter, there’s something wrong with that. That’s why I believe that when reactive resin balls came out, they should not have been allowed at the professional level. They are amateur-level bowling balls. They allow you to miss two arrows to the right and still get the ball to come back and strike. Back in the day when we were using urethane, plastic, and rubber balls, you couldn’t miss two arrows to the right and still strike. Reactive resin balls should have never been allowed in bowling.

During the mid-1990s, when reactive resin balls were first introduced, you hit a dry patch in terms of PBA titles. What did you learn that allowed you to once again be competitive?

Actually, when they first came out in 1994, I had a really good year. In 1995, however, they started oiling boards rather than the lane, and this created a really wet/dry condition. When the ball was in the oil, it wouldn’t move, but as soon as it hit the dry, it would go bananas. I was ready to quit the Tour in 1995. I made $4,500 for the entire year on the National Tour. The only thing that kept me alive was that I made $45,000 in the Regional events.

My brother Rich got with me and told me, “Pete, if you want to be successful with these bowling balls, you have to learn to get it to roll more end over end. You have to get it to roll more forward.” This guy Bob Schaffer from Cobra Products called me and said, “Hey, I think I’ve got a device that will help you learn to stay more behind the ball.” He came down and worked with me and Rich at the end of 1995 using the Cobra Scorpion. I learned how to stay behind the ball. I had to learn all over again how to throw these bowling balls, but once I learned, I got it. I understood. I retrained myself to throw the ball end over end.

I’ve heard it said that you know very little about modern bowling balls, allowing the ball reps full control of your ball selection. How much do you actually know about your bowling balls?

(Laughs) Probably absolutely nothing! I know what my ball should look like rolling down the lane. That’s why I rely on my ball reps to give me the balls I need to see that. If it weren’t for them, I probably wouldn’t be here right now. The reps have all been a big part of my success with these bowling balls. Now when I go home, people ask me about a particular ball and I say, “Uh, I don’t know.”

With the ball reps who are constantly behind you when you bowl, do you ever feel like you’d just like to be left alone for a while?

Yeah, I do. Sometimes I just want them to leave me alone ’cause I’m frustrated, and I’m trying to figure it out myself. They might come down, and I might explode at them. “Just leave me the f— alone.” Then, when I’ve calmed down some, I’ll go to them and say, “Now, what we’re you trying to say to me?” Like any other kind of sports figure, sometimes you just want to be left alone.

There have been many discussions online about using different layouts vs. using one or two layouts and letting the differences between the balls determine the different reactions that you are looking for. What is your view? Limited layouts or many layouts to tailor ball reactions?

Well, in my experience out here with this reactive stuff, I have three layouts that I use. They might vary just a little bit, but I always have the pin above my fingers with the extra hole on my axis point. Alright? That’s a pretty basic layout for anybody. I know Norm Duke is the only one out here that only uses one layout. It doesn’t matter what kind of ball it is, he only uses one layout.

Then, I have another layout where the pin is below my ring finger or just in the space between the finger holes; that’s the variance. The extra hole is down more towards the thumbhole to make it rev earlier; not roll earlier, rev earlier. I use this layout when there’s a lot of oil on the lanes.

Then, the other layout I have has the pin right in the middle of my span with the same hole as the pin-down one. This allows the ball to rev even quicker, and that’s for really heavy oil.

So those are the basic layouts I use. And I say, over three layouts, good luck!

The use of urethane bowling balls is on the rise in recent years on certain conditions. Do you personally ever feel the need to use urethane equipment?

Well, actually, urethane is being used on all conditions now, not just short patterns like the Cheetah. These high rev rate guys find that the reactive balls are just too reactive, so they use the urethane stuff. I’ve tried the urethane stuff, but with the amount of oil they use now, it just doesn’t have time to react. When it reacts, it reacts too early, and when I get it past that early spot, then it reacts too late. Urethane right now is not good to me. Every once in a while I think that I need a urethane ball in my hand and that’s where the ball reps step up and say, “No, you’re not a Jason Belmonte. You’re not Jesper Svensson. You’re not AJ Chapman. Your ball doesn’t rev that much, so we can keep your eyes focused ...